Skip to content
Oct. 3, 2022 | By a Falun Dafa practitioner in Melbourne

(Minghui.org) Practitioners held car tours throughout Melbourne’s city centre and the surrounding areas each weekend in August and September 2022. They mounted display boards with information about the spiritual practice and how the Chinese Communist Party (CCP) persecutes it on the tops and sides of their cars.

The final game of this year’s Australian Football League (AFL) was held on September 24. Around 100,000 fans went to MCG Stadium in the centre of Melbourne, and many of them saw the car tour caravan as it passed by.

Display panels on top of more than 20 cars read: “Falun Dafa is good, Truth-Compassion-Forbearance is good,” “Falun Dafa spreads around the world and one hundred million people benefit,” “Falun Dafa is free to learn,” “Falun Dafa practitioners in China risk their lives to tell the truth,” and so on in both Chinese and English.

The car tour drew the attention of many passersby, who took photos, gave a thumbs-up, and pressed their palms together in a gesture of respect. 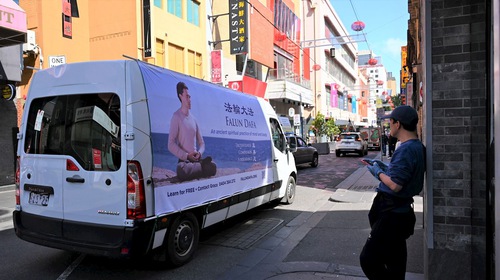 Hope for Freedom of Belief in China

“I hope good people will continue to work hard, and I hope I can see the day when China has freedom of belief and freedom of assembly,” he said.

Ross from Melbourne had just finished shopping and stopped to watch the cars pass by. He said that he knows the CCP is a dictatorship. When he heard that practitioners were tortured because of their belief in Truthfulness-Compassion-Forbearance, he said it was unfair.

“I never thought that this group of people would be so brutally persecuted by their own government,” he said.

Ross listened as a practitioner explained Falun Dafa and said he was pleased to know that the spiritual belief helped many people maintain hope and health during the pandemic. He expressed admiration for practitioners in China who risk being arrested to tell others about the benefits of practicing Falun Dafa and raise awareness of the CCP’s persecution.

He observed that Falun Dafa practitioners were peaceful when they protested the persecution. “This increasingly reckless and stressful world needs people who believe in Truthfulness-Compassion-Forbearance.”

“I Will Pay More Attention to Falun Dafa”

A man who wished to remain anonymous said that he was deeply disturbed by the CCP’s infiltration around the world, especially considering it has a history of violent revolution.

“I’ve heard many stories of the CCP planting spies in free countries.” He said it made people feel unsafe even when they traveled outside of China. “If the Chinese government wants to do something to someone, maybe the person will be treated as cruelly as others who oppose it (the CCP).”

He said he was very impressed that Falun Dafa practitioners were not intimidated and persisted in their belief, “I will look into the persecution of Falun Dafa and pay more attention to this group.”