Skip to content
Oct. 2, 2022 | By a Minghui correspondent in Queensland

(Minghui.org) The Art of Zhen Shan Ren (Truthfulness, Compassion, Forbearance) International Exhibition was held at Inala Art Gallery in Brisbane between September 3 and 17. Over 30 artworks created by Falun Dafa practitioners were displayed. Many attendees said they were deeply moved by the pure energy and practitioners’ perseverance despite the brutal suppression.

“The artists, through their brushstrokes, depicted the beauty of Falun Dafa and the courage of those who have endured the brutal persecution in China,” wrote Michael Berkman, a member of Queensland Legislative Assembly, “The artworks also reveal the brutality and inhumanity of the persecution that has lasted for 23 years.” 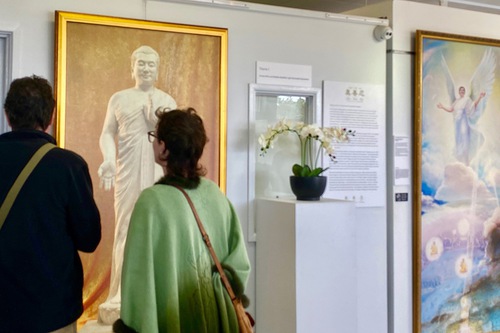 Dr. Cuong Bui, member of the Order of Australia and President of the Vietnamese Community in Australia’s Queensland Chapter, said he is familiar with the brutality brought about by the Chinese Communist Party (CCP).

In May 2022, the European Parliament also passed a resolution condemning forced organ harvesting in China.

“[The] the heavy reliance on executed and living prisoners as a source of transplant organs [in China] entails a wide range of unacceptable human rights and medical ethics violations,” wrote the resolution. Unfortunately, such an atrocity still continues.

The CCP’s crime has threatened basic rights of everyone, said Bui. Citing words from Spanish philosopher and essayist George Santayana, he said, “Those who cannot remember the past are condemned to repeat it.”

Charles Strunk, Councilor for Forest Lake Ward, said he did not know much about Falun Dafa in the past other than the ongoing suppression in China. That is why he was thankful for the art exhibition since through it, he learned much more.

These artworks showed the artists’ great talents, he said. There are a variety of themes, from happiness to other topics. He hopes more members of the community will come and learn like him. Mr. Strunk said he was fortunate to attend such an exhibition that toured around the world.

Michael Berkman, Member of the Queensland Legislative Assembly for Maiwar, said the exhibition was held in over 900 cities across 50 countries and “has received the applause of visitors as well as art experts.”

“I join Falun Dafa practitioners in their call for an end to the violence and persecution of the Chinese regime,” he wrote in his greetings, “The Falun Gong community have shown incredible perseverance in their continued fight against persecution and it is a privilege to have this struggle expressed in such incredible artworks.”

Leanne Linard MP is also Minister for Children and Youth Justice and Minister for Multicultural Affairs. “Today’s opening ceremony, and indeed the full exhibition, is a wonderful opportunity to celebrate Queensland’s diversity and gain a unique insight into the spiritual discipline of Falun Gong through visual art,” she wrote in her greetings, “I am sure that the artwork on display will be thought-provoking and will inspire people to learn more about Queensland’s multicultural and multi-faith society.”

Inala Art Gallery chairperson Lin Nguyen said she loves art and was really happy to host such a great event.

“The story behind these artworks are very touching,” she said. When everyone had left the day before, she stayed and reflected on art and the exhibition. She was moved and inspired by this story and history. Although there were no words, she could feel the message and was honored to be part of the exhibition.

Medical student Miley Duroux and her family happened to stop by. Impressed by the artwork, she listened to the explanations of each one. She said this is one of the best exhibitions she ever saw and she learned a lot. One of the paintings depicted an orphan girl and the artwork was especially touching.

Ms. Duroux noticed that although Falun Dafa practitioners were detained for their belief, they had no resentment. She was moved by the great compassion and she hopes more people will come and see it. She also hopes the CCP will soon collapse so that more people could freely practice their belief.

Many people left remarks on the guest book.