Skip to content
Oct. 3, 2022 | By a Minghui correspondent in Queensland

(Minghui.org) Falun Gong practitioners held a rally in Brisbane Square in downtown Brisbane on September 24, 2022, to celebrate the 400 million Chinese people who have withdrawn from the Chinese Communist Party (CCP) and its affiliated organisations.

People from all walks of life came to the rally to show their support. Dr. Cuong Bui, who was previously awarded an Order of Australia Medal and is a GP, spoke at the rally. He said: “I congratulate the 400 million Chinese who have quit the CCP. This is good news for Chinese citizens, I hope they will awaken to the truth soon.”

Dr. Cuong Bui is also president of the Vietnamese Community in Australia’s Queensland Chapter and has a clear understanding of the CCP. He believes that the Party is not China. In fact, it is destroying China. Under the CCP’s rule, Chinese nationals went through countless political movements resulting in at least 60 million or 70 million deaths.

“The most important thing is we should not be afraid. If we don’t stand up to speak, this country will not have freedom and democracy. We must think of the future of our future generations. This is extremely important,” he said.

He ended his speech with a quote from George Santayana: “’Those who cannot remember the past are condemned to repeat it.’ We should stand up to oppose the CCP’s evil deeds and end its rule.”

Practitioners performed a dragon dance and played the Chinese waist drums at the rally. The joyous atmosphere and practitioners’ colorful banners attracted many people’s attention.

One spectator said, “At this crucial, historic turning point, 400 million Chinese nationals have made a wise choice to quit the CCP. It is a sign of the regime’s collapse and this will make more Chinese nationals wake up. It is an unprecedented spiritual awakening movement.” 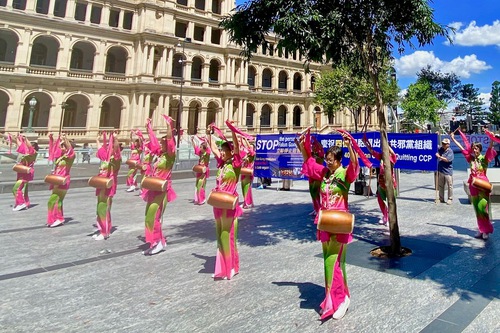 Spokesman for the Queensland Falun Dafa Association: 400 Million Withdrawals Is a Milestone

John Dowie, spokesperson for the Queensland branch Falun Dafa Association, said at the rally, “Today is a celebration. We celebrate the imminent downfall of the CCP, we will witness the eternal end of communism globally.

“The Global Quit the CCP Centre has confirmed that 400 million Chinese people have quit the CCP, this is a milestone. Now the whole world has clearly seen that not only is the CCP persecuting Chinese citizens, it is a threat to the whole world. More and more people realized that the regime is on the brink of collapse. CCP officials have transferred their family and wealth overseas. The disintegration of the CCP is a huge thing, you can sign a petition to show your support and tell your family about this. All of you will be a witness to the end of communist ideology.”

We Must Resist the CCP’s Persecution Together

Jacob, a representative of the Hong Hong International Alliance in Brisbane, said, “We are here today to celebrate 400 million withdrawals from the CCP. We must understand that the CCP does not represent Chinese citizens. The regime has been persecuting minority groups, religious organisations, and political dissidents for a long time. It has committed many crimes against humanity. The UN has censured the CCP for its crimes against humanity.”

As a Hong Kong citizen, Jacob has witnessed the regime’s autocratic rule and its violation of the Sino-British Joint Declaration.

“The CCP has killed millions of Chinese people in its political movements, such as suppressing anti revolutionists, land reforms, the cultural revolution, the June 4th Tiananmen Square student massacre, and now the persecution of Falun Gong. The purpose of our existence is to be clear on and see through the evil nature of the regime. We cannot believe the CCP,” he said.

He ended his speech by saying: “Today, we will unite to oppose the evil CCP, we must resist its suppression together.” 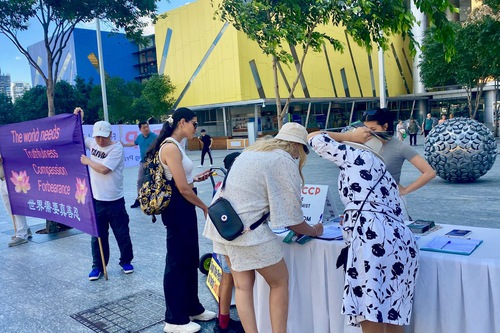 Michael Swift, who works in the wood trading industry, watched the rally and then said, “Before I saw your banners, I did not realise that 400 million Chinese had already quit the CCP. The CCP is quite autocratic, Chinese people have no freedom of belief.”

Michael lived in Hong Kong for a while. He saw Falun Gong practitioners near the ferry there. He said, “I know the CCP is persecuting Falun Gong. It hopes to control everyone.

“It is very dangerous to do such a thing [celebrating the withdrawals], so you must truly work hard in spreading the truth to all parts of the world, get people’s attention, and keep on doing what you did today.”

He said he sympathised with Falun Gong practitioners who are victimised and hoped more Chinese people will learn the truth.

Daniel Ennis, who works for the Queensland government, listened to a practitioner explain the situation and then said the CCP has been persecuting Chinese citizens who follow Truthfulness, Compassion, and Forbearance for all these years. “The regime’s suppression is shameful, speaking the truth is legal.” He said he was keen to learn more about Falun Gong online.