Skip to content
Sept. 25, 2022 | By a Falun Dafa practitioner in Queensland

(Minghui.org) Falun Dafa practitioners were once again invited to participate in the Grand Central Floral Parade, part of the 73rd Toowoomba Carnival of Flowers, held on September 17, 2022. Their entry was awarded the first prize.

Known as the Garden City, Toowoomba is the second most-populous inland city in Australia and this event is also the longest running floral event of its kind in the country. 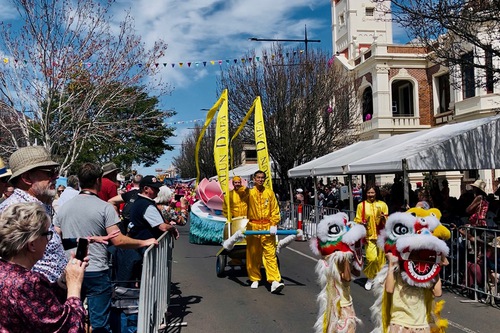 The Tian Guo Marching Band, dragon dance team, and waist drum team performed. Many spectators said that they were impressed by the practitioners’ energy and that the stirring melodies such as “Falun Dafa Is Good” resonated with them. Dressed in costumes of various Chinese ethnic groups, young practitioners carried posters with the words, “Falun Dafa Is Good” and “Our World Needs Truthfulness-Compassion-Forbearance.”

There were over ten stations along the parade route, each with two hosts to introduce the participating groups. One host said that ever since she was a child, the Falun Dafa Association of Queensland has been attending such events and celebrating with the local community. She announced that Falun Dafa is an ancient practice that promotes the principles of Truthfulness-Compassion-Forbearance.

“The Tian Guo Marching Band is very unique,” the host explained. “Launched in 2006, the band has participated many events in Australia. The traditional blue and white costumes are also amazing,” she added. 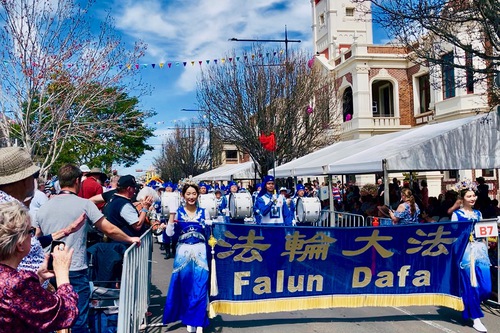 James O’Shea, City Councilor and Chair of the Environment and Community Committee, is also a parade spokesperson. He applauded the Falun Dafa practitioners’ performances and noted that they are always colorful and spectacular. He was happy to see that practitioners won the first prize and wished them continued success in future events in the community.

Mr. O’Shea pointed out that the principles of Truthfulness-Compassion-Forbearance are critical, and that practicing them would benefit the community in the long term. He said that is why he is thankful for practitioners.

Karin, a middle school teacher in Toowoomba, said she loved the parade, especially the practitioners’ performances. “The colors are beautiful, the music is inspiring, and the dragon dance and waist drummers are great too,” she said. “Everything is excellent!”

Having seen Shen Yun previously, Karin knew of the persecution of Falun Dafa in China and finds it unbelievable that these peaceful practitioners would be arrested in China for their belief in Truthfulness-Compassion-Forbearance. “The Chinese Communist Party (CCP) is terribly bad,” she said. “I hope the nightmare will end and practitioners can freely practice their belief.”

College Researcher: This Is What Our Society Needs

Mamun from Bangladesh is a research fellow in public health at Queensland University. He said that the Falun Dafa practitioners’ performances were superb. “The Tian Guo Marching Band’s music is peaceful and energetic and the dragon dance is wonderful – my kids loved them so much!” he exclaimed.

He agreed that the principles of Truthfulness-Compassion-Forbearance are indeed important. “This are especially important during the chaos we are facing. With those values in mind, we can avoid wars and head towards peace and prosperity,” Mamun said. He once again thanked practitioners and said he would share the information about Falun Dafa with his friends.

The Persecution Must Stop

Jasmin Caswell, a coordinator of a senior care facility, and school teacher Craig Caswell watched the Tian Guo Marching Band perform. Afterwards, they stopped and chatted with a practitioner.

Jasmin said that it’s great that Falun Dafa practitioners are following the principles of Truthfulness-Compassion-Forbearance in their daily lives, and she hopes more people will do the same. Her husband agreed and the couple thanked Falun Dafa practitioners for supporting the community. They said it is hard to believe that such a beautiful practice is suppressed in China.

Many people signed petitions to show their support for Falun Dafa practitioners in China. One person said, “The CCP is vicious and the persecution must stop.” Another added, “I agree and I think we should all reject the CCP.” Yet another person said, “I hope my signature helps end the CCP. Thank you and the best of luck in everything!”