Falun Dafa practitioners participated in the 72nd Toowoomba Carnival of Flowers in Queensland, on September 18, 2021. They have been invited to participate since 1999.

The practitioners’ entry consisted of a flag team, waist drum team, lotus maidens team, dragon dancers, and a gong and drum team. Many spectators exclaimed and clapped in time with the music as the waist drum team performed the song, “Falun Dafa Is Good.” People waved, applauded, and took photos. 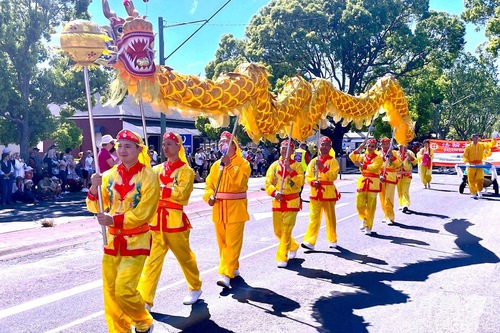 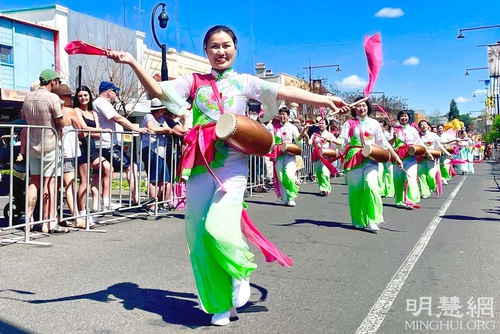 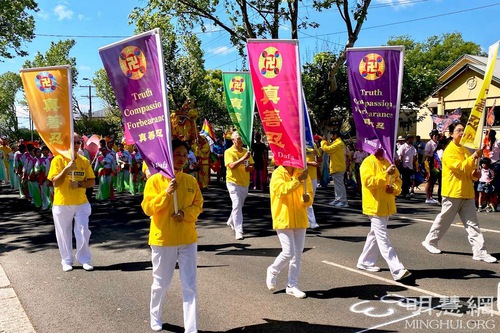 Practitioners participate in the 72nd Toowoomba Carnival of Flowers Parade in Queensland on September 18.

Joy and Hope Despite the Pandemic

The Toowoomba Carnival of Flowers (also referred to as the Flower Festival) lasts for an entire month, and celebrates the arrival of spring in the southern hemisphere.

The highlight is the float parade, which is the oldest community parade in Australia and in the entire southern hemisphere. It is also the largest parade in Queensland since the city has reopened. The parade drew tens of thousands of spectators.

Because approximately 15 million people in Australia are still under lockdown, the parade brought joy and hope to Australians, despite the pandemic.

There were many announcers along the parade route. They announced the arrival of the Falun Dafa group through loudspeakers and told a little bit about what Falun Dafa is.

One announcer said, “Look! The splendid and colorful Falun Dafa procession is coming. They have been part of the Toowoomba Carnival of Flowers for 22 years, since 1999.”

The announcers also said, “Falun Dafa (also known as Falun Gong) follows the principles of Truthfulness-Compassion-Forbearance. It is a self-improving traditional practice with five exercises including a meditation. Over 100 million people across the world benefit from practicing Falun Gong. By practicing, they have better physical and mental health and improved quality of life.”

The announcers also said that Falun Dafa practitioners teach the exercises for free.

City Councilor Thanks Practitioners for Their Contributions to the Community

James O’Shea, chairman of the Toowoomba Environment and Community Committee and spokesperson for the Flower Festival, said that Toowoomba is a multicultural community. Many different ethnic groups participated in the parade. He said he was Filipino but was born in Australia.

He said, “The Falun Gong group are very welcome. I thank Falun Gong practitioners for spreading Truthfulness-Compassion-Forbearance and making contributions to the community.”

Callum, a manager for a commercial bank, brought his twin daughters to see the parade. He said he was impressed by the practitioners’ performances.

He said, “Thank you for the wonderful performance. The message of Truthfulness-Compassion-Forbearance that Falun Gong conveys is very important. They are universal values and should be vigorously promoted.”

He learned about the Chinese Communist Party’s (CCP) persecution of the practice and expressed his support for it to end.

Toowoomba was full of cheerful crowds and gorgeous flowers. Sean White, a local reporter, covered the event and praised the Falun Gong entry.

He said, “The 72nd anniversary of the Toowoomba Carnival showcases the tradition of multiculturalism, and many ethnic groups, like the Vietnamese, Indian, and Irish, participate. The Falun Gong team brings color and the principles of Truthfulness-Compassion-Forbearance. This is really great.”

Public Support Practitioners Against the Persecution

Practitioners clarified the truth to local people and tourists after the parade. Many people said that because the CCP covered up the coronavirus outbreak initially, it was able to spread all over the world. More and more people now know the nature of the CCP and expressed their support for practitioners in their efforts to expose the persecution.

Jiang Zemin, former head of the Chinese Communist Party (CCP), perceived the spiritual discipline’s growing popularity as a threat to the CCP’s atheistic ideology, and on July 20, 1999, issued an order to ban the practice.

The Minghui.org website has confirmed the deaths of thousands of practitioners as a result of the persecution over the past 22 years. The actual number is believed to be much higher. More have been imprisoned and tortured for their faith.

There is concrete evidence that the CCP sanctions the harvesting of organs from detained practitioners, who are killed to supply the organ transplant industry.