During the three-day festival, practitioners introduced Falun Dafa by participating in a parade, demonstrating the exercises on stage and setting up an information booth. They also taught people how to make folded paper lotus flowers and collected signatures on a petition to end the persecution in China.

Many people were interested in finding out more about Falun Dafa and learned the exercise movements. They were shocked to hear about the Chinese Communist Party’s brutal suppression in China, especially the regime’s state-sanctioned forced organ harvesting which targets Falun Dafa practitioners. They signed the petition calling for an end to the atrocities.

Practitioners also had an information booth at Merkez Park. Many festival attendees came to the booth to learn the exercises. Practitioners held workshops to teach people to make paper lotus flowers. Many children participated.

Mr. Caner, a member of AFAD (Disaster and Emergency Management Presidency), wanted to learn the exercises and he also took many brochures. He was shocked when he was told about the brutal persecution in China. He immediately signed the petition.

Another man said after learning of the brutalities, “This is a persecution of kind hearted people in the world.” He also signed the petition.

Emre is 5 this year. He came to the Falun Dafa information booth for two days and earnestly learned the five sets of exercises. He also took a lotus flower as well as a brochure and gave them to his mother. He returned subsequently to ask for more brochures to give to his other family members.

On Saturday March 26 a parade was held as part of the festival. The practitioners’ colorful float was praised by spectators who reached out to get more information about Falun Dafa.

Practitioners were also given an opportunity to demonstrate the exercises on the festival stage. A woman said she felt a warm current flow through her body while she watched the exercise demonstrations. The pain in her spine suddenly vanished. 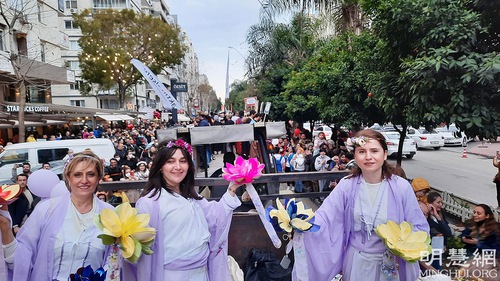 Ayþe hn (right in the photo below) is a translator. She watched the practitioners demonstrate the exercises on stage and took many photos. She approached afterwards to learn more about Falun Dafa. She was very sad when practitioners told her about the suppression in China. She said, “The CCP is absolutely wrong to torture so many people.” She also said her son is keen to learn the exercises and she will find out more about it online.

Practitioners gave out several thousand brochures during the festival and plan to start a practice site in Adana. The local TV station, Koza TV, came to the Falun Dafa information booth to interview practitioners.