(Minghui.org) Falun Dafa practitioners participated in Chinese New Year festivities which were hosted by Honolulu’s Chinatown, to celebrate the Year of the Rabbit on January 14, 2023.

This was the first New Year festival held since the COVID pandemic lock down in 2020 and more people than usual attended. Practitioners participated in the parade and had a booth where they taught people the exercises and distributed information about Falun Dafa. 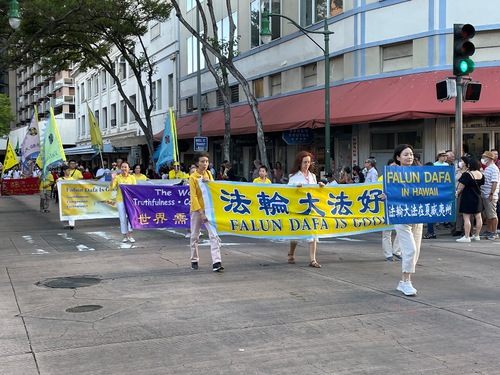 Some spectators applauded and gave thumbs up when practitioners passed by and others imitated their exercise movements. After learning about Falun Dafa, some locals showed their approval by showing a fist and palm, an old Chinese greeting. Many people shouted, “Falun Dafa is good!” Local television stations also filmed footage of practitioners. 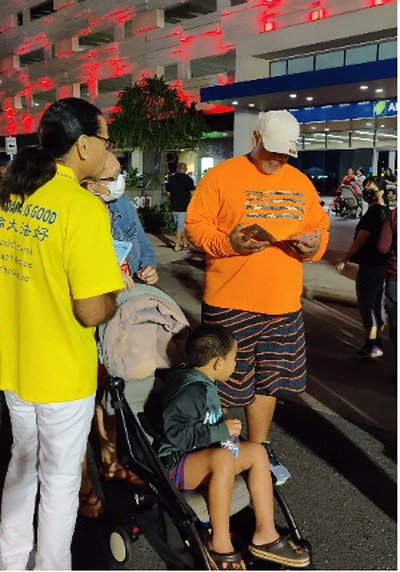 At their booth, practitioners demonstrated the Falun Dafa exercises, distributed truth-clarification materials and lotus flowers and clarified the truth about the persecution.

Many people were interested in Falun Dafa and said they admired practitioners’ determination in resisting the Chinese Communist Party’s (CCP) ongoing persecution. Some took pictures of the booth and of the practitioners’ exercise movements. Many locals chatted with practitioners and said they wanted to learn the exercises.

Mr. Ye stopped at the practitioners’ booth and said he was interested in practicing Falun Dafa. When a practitioner recommended several Falun Dafa books to read, he gladly accepted them and said that he would read them.

Many said this was the first time they heard about Falun Dafa. When they were told how the CCP persecutes Falun Dafa, they expressed their concern and asked for more flyers to distribute to their colleagues.

New Practitioner: “This Is What I’ve Always Been Looking For”

This was the first time they participated in a Falun Dafa activity to raise awareness. Rock said, “This is great! This is really great!” Roberta said, “This is what I’ve always been looking for.” She said they both felt fortunate to be practicing Falun Dafa.

Falun Dafa (also known as Falun Gong) was first introduced to the public by Mr. Li Hongzhi in Changchun, China, in 1992. The spiritual discipline is now practiced in over 100 countries and regions worldwide. Millions of people who have embraced the teachings, which are based on the principles of Truthfulness, Compassion, and Forbearance, and have learned the five exercises have experienced improved health and well-being.