(Minghui.org) An annual art fair was held in Bangalore on January 8, 2023. The art fair, Chitra Santhe, was held at Karnataka Chitrakala Parishath, an art complex in Bangalore which is the leading centre for visual arts. The cultural event showcases affordable art to the public and theme of the event is: “Art for All.” Falun Dafa practitioners participated in the event.

The annual art fair was held on Sunday, January 8 this year. More than 1200 stalls displayed their art and over one million people visited the event. Falun Dafa practitioners in Bangalore have participated for 5 years.

The fair opened at 8 a.m. and ended at 8 p.m. Some practitioners traveled from other cities, almost 300 km (186 miles) away, to participate in this activity. They displayed paintings from the Art of Zhen Shan Ren exhibition, demonstrated the exercises and distributed fliers to tell people about the Chinese Communist Party’s (CCP) persecution of practitioners in China which has been going on for 23 years. 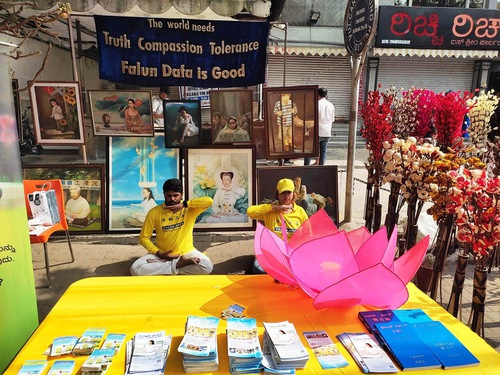 An art student came early in the morning and stood for a long in front of the painting titled, “A Tragedy in China”. She asked if the person in the painting was still alive. She said as an art student it is rare to see paintings done in true classical tradition and she said each painting showed the artists’ mastery and was realistic.

The paintings of the Art of Zhen Shan Ren exhibition are from a diverse group of accomplished artists from various countries who are Falun Dafa practitioners. These works poetically depict the beauty of life lived in accord with Truthfulness-Compassion-Forbearance and also show the grim realities of the cruel persecution that Falun Dafa practitioners have faced for the past 23 years at the hands of the Chinese Communist regime.

Another person said that the Falun Dafa booth stood out among all the booths because of the wonderful collection of paintings and the gentle music that was playing and people meditating.

Some tourists from other countries said they have seen Falun Dafa practitioners in their country and gave them a thumbs up sign.

Niveditha lived in Canada and practiced Falun Dafa for a year. She was excited to see Falun Dafa in India. She said she would go to the practice site and resume practicing.

One person got a flyer and learned about the persecution of Falun Dafa practitioners in China. He was so moved by what practitioners were doing voluntarily that he also wanted to distribute the information to people.

Minghui.org has confirmed the deaths of thousands of practitioners as a result of the persecution over the past 24 years. The actual number is believed to be much higher. Countless practitioners have been imprisoned and tortured for their faith.