(Minghui.org) Practitioners participated in two Christmas parades on November 26 and introduced Falun Dafa to local communities. One of them was in Whangārei, the Northland Region capital, and the other one was in Orewa, a suburb of Auckland. 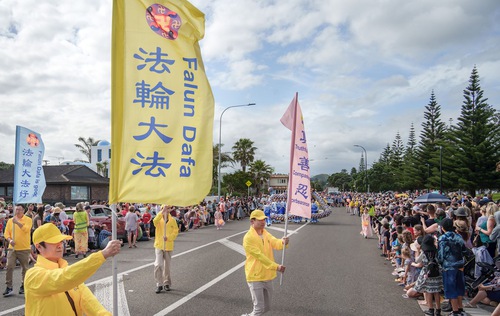 Connection with the Divine

Ranita Nerayan from India said that she attends the Christmas parade every year. “I am always so happy to see Falun Dafa practitioners’ performances,” she said.

She said that meditation can bring a peaceful mind. “The principles of Truthfulness-Compassion-Forbearance provide us with great guidance and they connect us with the divine. These virtues will help people to get along well with each other.” Both she and her mother were impressed by the practitioners’ peaceful demeanor and the Tian Guo Marching Band’s energy.

Peter and Judy Leishman, husband and wife, said they liked the Tian Guo Marching Band. “The music is awesome and the costumes are fantastic!” she exclaimed. “Our society needs the principles of Truthfulness-Compassion-Forbearance.”

Colleen lives near the parade’s starting point and said she felt the Tian Guo Marching Band’s music was amazing. “The Christmas melodies they played were also great. The principles of Truthfulness-Compassion-Forbearance will benefit our entire society,” she said.

Shalbin Singh owns a hair salon, and he was excited to see Falun Dafa practitioners in the parade. “The music is mesmerising, the clothing is refreshing, and the dragon dance brings us energy,” he said.

Falun Dafa (also known as Falun Gong) was first introduced to the public by Mr. Li Hongzhi in Changchun, China, in 1992. The spiritual discipline is now practiced in over 100 countries and regions worldwide. Millions of people who have embraced the teachings, which are based on the principles of Truthfulness, Compassion, and Forbearance, and have learned the five exercises, have experienced improved health and well-being.