Skip to content
Nov. 30, 2022 | By Minghui correspondents in Toronto 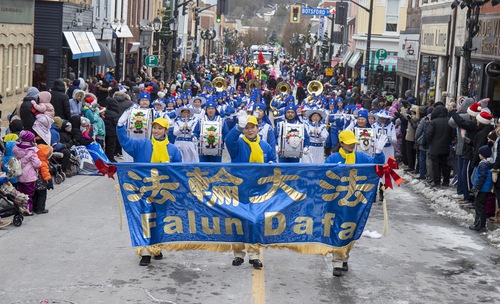 For many years, the organisers of the Newmarket Santa Claus parade invited the Tian Guo Marching Band to attend the event. Preparations for the parade resumed after the COVID pandemic restrictions were eased, and they invited practitioners to participate.

Darlene, who organized the parade this year, said, “We invited the Tian Guo Marching Band again. I went to the website once again after the band accepted the invitation. This time, we arranged for the band to be the finale because we know many people love the Falun Dafa group.”

Bill Deline who coordinated the Milton Santa Parade began contacting practitioners on January 18, 2022, inviting them to perform in the parade. He sent a reminder every month. According to Danielle, who coordinated the parades this year, Bill told her delightedly he was relieved after she confirmed the invitation.

Bill sent an email at once after the parade: “The parade today was amazing and the weather was perfect. Your group was excellent as usual.” He also invited practitioners to attend the music parade held in summer as well as the Christmas parade next year. 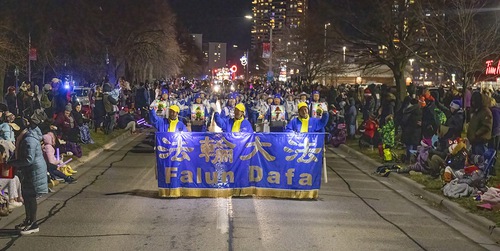 Chinese Couple: It Was Powerful to Watch the Tian Guo Marching Band

Mr. Chen and his wife Ms. Liu have lived in Canada for nearly two decades. As their child took part in the Scouts group in the parade, they came to Ajax to watch the celebrations.

When the Chinese waist drum team appeared, the first thing they saw were the golden characters “Falun Dafa Is Great” on a banner. Mr. Chen said, “I knew about Falun Dafa when I was still in China. All of them (practitioners) are good people. I always felt that those suppressed by the Chinese Communist Party (CCP) must be good people because [the CCP] is an evil organisation. I read the Epoch Times newspaper before—this media is doing an excellent job!”

As the Tian Guo Marching Band marched past, Mr. Chen said, “I saw them perform before in Chinatown. The music they play is great and their performances are powerful.”

Practitioners explained that despite the brutal suppression in China, they did not hate the persecutors. Instead, practitioners have persisted in raising awareness of the persecution using peaceful means. Ms. Liu agreed saying, “Falun Dafa practitioners hold themselves to high standards. I heard that when they appealed for the right to practice Falun Dafa, even the ground was clean when they left. Yet the CCP chose to vilify the practice. We all know these are lies, we read the Nine Commentaries on the Chinese Communist Party.”

Mr. Chen said, “We already quit the CCP.” Ms. Liu said, “In fact, the CCP is a cult. Unfortunately, many Chinese believe its propaganda. They don’t think for themselves and were consequently deceived by it.”

Can We Learn Falun Gong in Our Small Town

Moses, a teacher, takes his children to the Santa Parade every year. He loved the music played by the Tian Guo Marching Band and their uniforms.

He had never heard of Falun Dafa before. He was very interested in learning more. He said, “This sounds wonderful. Can I learn Falun Dafa in our small town?”

He listened intently as practitioners described the persecution in China. His expression became serious. He said, “I think practitioners are great to come here to express their views in the face of this unfair treatment. I definitely hope to see things change. In particular, you simply want to practice your meditation in peace. There is nothing wrong with this.”

You Are Truly Amazing

Miranda is a home loan consultant, and this was the first time she attended the Ajax Santa Parade. She said the uplifting beat of the music played by the Tian Guo Marching Band filled her with joy.

A practitioner explained that Falun Dafa teaches one to be kind yet practitioners are brutally tortured in China for their belief. The band’s performances are one way they use to tell people about the persecution. Miranda’s eyes shone with tears of sympathy for the plight of practitioners.

With a sigh, she said, “I think they (practitioners) are truly amazing. They stepped out for their conviction. I feel comforted. I heard about some of the scandals of the CCP but I need to know more. I think Truthfulness, Compassion, Forbearance is absolutely wonderful. I want to live by these principles.”

Jeff works in a bank in Toronto. He took a video of the Tian Guo Marching Band and said, “This is the first time I’ve seen this band perform. They are spectacular. I’m recording it to show it to my youngest son.”

The Music Is Great

Livi, one of the spectators at the Markham Santa Parade kept taking photos of the Tian Guo Marching Band. She said, “My son and his family live in Markham and the whole family came to watch the parade today. The music performed by this band is great! It’s the first time I’ve seen them perform. They are perfect!”

When Livi learned that members of the band practice Falun Dafa and strive to follow the principles of Truthfulness, Compassion, Forbearance, she said that these values are correct.