More than 30 groups participated in the annual festival at the Labor Welfare Hall and City Gymnasium. Falun Dafa practitioners demonstrated the exercises at their booth, taught people the exercises, and passed out fliers to visitors. 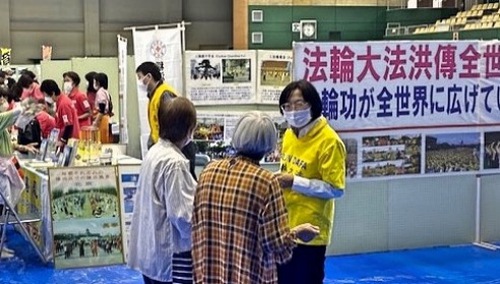 An endless stream of visitors passed by the Falun Dafa booth. People took fliers and listened to practitioners introduce Falun Gong. Some wanted to know where they could learn the exercises, and some learned the exercises at the event.

During the event, many visitors heard about Falun Gong’s miraculous healing and fitness effects and learned about the Chinese Communist Party’s persecution of the practice.