Skip to content
Nov. 1, 2022 | By a Falun Dafa practitioner in Ireland

(Minghui.org) Greetings, signatures, handshakes, hugs… This is how tourists from all over the world—as well as the Irish—expressed their support for Falun Dafa practitioners in their efforts to expose the persecution.

Practitioners held an event on a bustling commercial street in the centre of the capital, Dublin, on October 22, 2022. They demonstrated the exercises, distributed information, and collected signatures on a petition to end the persecution. Many visitors from China also expressed their admiration for Falun Dafa practitioners’ courage and persistence.

The brutalities portrayed in the pictures of how the Chinese Communist Party (CCP) tortures practitioners was in stark contrast to the peaceful and graceful exercise demonstrations that attracted passersby to stop and watch and take pictures. 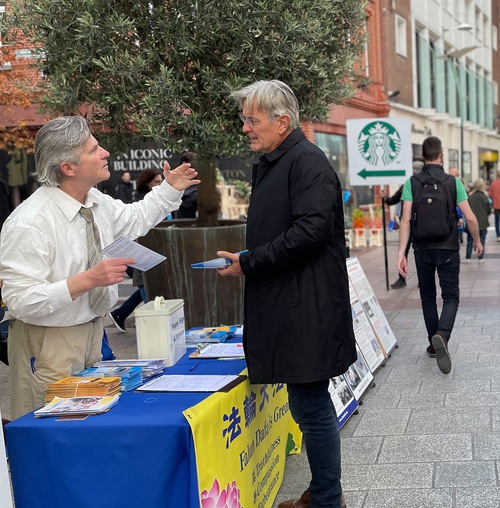 In Ireland on a business trip, a woman from China was walking in downtown Dublin when she noticed practitioners meditating and stopped to chat. She said she’s been to several countries and seen practitioners holding events and demonstrating the exercises many times.

A practitioner told her that there are Falun Dafa practitioners in more than 100 countries around the world, but only in mainland China are they brutally persecuted, “If Falun Dafa is really as terrible as the CCP’s media claims it is, then why is it practiced in so many countries?” The lady nodded in agreement. She used a pseudonym to withdraw from the Youth League she’d once joined and thanked the practitioner, saying, “You have worked hard!”

A young lady from Wuhan, China, said she’d just earned her Master’s degree and now works in Ireland. She told a practitioner that she first heard of the persecution of Falun Dafa and the CCP state-sanctioned forced organ harvesting in a video when she was in Wuhan two years ago during the COVID lockdown. The evidence presented in the video shocked her. She said that she wept as she watched the short film. She couldn’t believe how a political party could do such inhumane things to people that believed in Truthfulness-Compassion-Forbearance. “It’s really cruel!” she said.

After seeing the video, she withdrew her application at work to join the Chinese Communist Party and told her parents about the CCP’s crimes of organ harvesting. She said that she admired Falun Dafa practitioners and was totally disappointed at the current situation in China. She was sad to be Chinese.

The practitioner told her that practitioners clarify the truth to Chinese people because they want them to be safe. The young lady seemed glad to quit the Youth League and Young Pioneers, two Communist Party-affiliated organizations.

Ms. Li, a financial clerk in a nearby company who moved to Ireland more than 20 years ago, noticed the practitioners’ event during her lunch break. She said she never uses WeChat app (a popular smartphone application controlled by the Chinese government that can collect users’ personal information and monitor users’ posts) and realised the disasters in China are caused by the CCP. “ The CCP is really not a good thing!” She quit the Young Pioneers, an organisation she’d joined in elementary school.

Aiden and Rebecca brought their daughter downtown to buy a birthday gift. They noticed the display boards and stopped to read them. The couple said they’d never heard of Falun Dafa before. After talking with practitioners, they learned that countless Chinese people lost their freedom, were tortured, and even had their organs harvested just because of their belief in Truthfulness-Compassion-Forbearance. They immediately signed the petition to end the forced organ harvesting from practitioners in China.

Stephen, a doctor who works in a downtown hospital, said he has been following the CCP’s persecution of this peaceful cultivation group for five years after he learned about the harvesting of organs from practitioners in China while they are still alive. Since he is a doctor, he felt that he was duty-bound to do something, so he wrote to his local TD (Member of the Irish Parliament) that Falun Dafa practitioners in China were being brutally persecuted and even having their organs harvested. He heard back from the TD that his letter was forwarded to Irish Foreign Minister Simon Coveney. The minister told him in a subsequent letter that the Irish government and other European countries were closely monitoring the issue.

Antonio, a tourist from Portugal, said he saw reports in the media about the persecution. Although he didn’t know much about Falun Dafa, he was well aware of the evil nature of communism and how the CCP if infiltrating the West, especially Europe. He supports Falun Dafa practitioners in exposing and stopping the CCP’s atrocities.

Heyder from Turkey signed the petition without hesitation when he passed by. He said that he was clear about the fact that the CCP slanders and persecutes Falun Dafa. He told a practitioner, “Before the crackdown, all sectors of Chinese society, including the military, believed that Falun Dafa was a good practice that benefited the people. This bloody crackdown was initiated by Jiang Zemin (former leader of the CCP). The persecution has not stopped and continues to this day.”

When the practitioner asked him how he got such detailed information, he said, “When you realize that you might be the next target for persecution, you will no longer turn a blind eye to the atrocities.”