Skip to content
Oct. 11, 2022 | By Minghui correspondents in Sydney

The hour-long march was led by police cars, and started from the Customs House, passed through many bustling streets in the city centre, and ended in Belmore Park opposite the Central Station.

The procession was several hundred meters long and consisted of three teams: “Falun Dafa is good,” “Stop the persecution of Falun Gong,” and “Celebrate 400 Million Chinese People Quitting the Chinese Communist Party and its Affiliated Organisations.” The Tian Guo Marching Band, consisting of nearly one hundred members, led the parade. 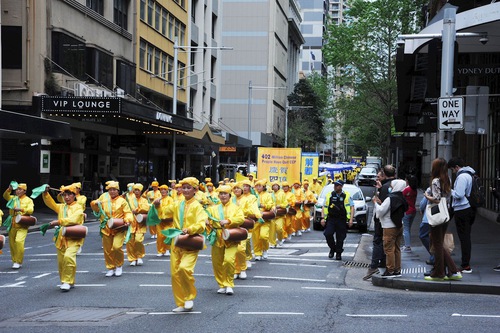 The Australian Falun Dafa Association held a press conference before the march. Several practitioners spoke and described how their family members in China were being persecuted by the Chinese Communist Party (CCP). They called on the Australian government to assist in rescuing their relatives.

Dr. Lucy Zhao, president of the Australian Falun Dafa Association, addressed the press conference, “Today we are here not only to expose the terrible crimes committed by the CCP, but also to call on the government to rescue the relatives of Australians who are illegally detained in China.”

Three Australian families who fled the CCP’s persecution also spoke and recounted the shocking experiences of their relatives who are being persecuted by the CCP.

Mr. Xiong Qi, a Falun Dafa practitioner who lives in Melbourne, demanded the unconditional release of his wife Jiang Yongqin. He said that she was an outstanding teacher at Zhejiang Sci-Tech University. On June 12 this year, the CCP police kidnapped her from her home and subjected her to a brutal and inhuman sexual assault. The police tortured her with items in a “torture toolbox” containing toothpicks, instruments, medicine bottles, wires, aphrodisiacs, etc.

The father of practitioner twin sisters Huang Doudou and Huang Guoguo was sentenced to four years in prison after being illegally detained six times in China. He was arrested again in July this year. They demanded that the Chinese authorities immediately release their father.

Ms. Tan Zezhen, the 73-year-old mother of Australian resident Ms. Chen Xiao, has been detained in Sichuan Province since December 2020. During the rally Ms. Chen recounted her own experience of being persecuted in China.

The Principles of Truthfulness-Compassion-Forbearance are Admirable

Dan and Simone were drawn by the bright colors of the parade. Simone said that the choreographed march made the whole procession fascinating and attractive, “It’s an amazing way to show the faith of Falun Dafa practitioners peacefully, with colors, beautiful people, and music. Very unique.”

“The march calls for a free and just life,” Dan said. “I’m sure I can learn something from the principle of Truthfulness-Compassion-Forbearance, because we all have negative thoughts sometimes. The principles are a way of resisting negative thoughts. I want to know more about it. I am interested in all kinds of philosophical ideas. The principles of Truthfulness-Compassion-Forbearance are absolutely admirable.”

Regarding the persecution, Dan said it was hard to imagine something like this happening in the 21st century. He wished to know more details.

He said he was willing to support those practitioners being persecuted in China. He wanted to let them know that Australians empathized with what they were experiencing, and wished to help them. He said he hopes things will change in the future.

The Message of the March Is Moving

Marilyn was deeply moved by the message of the march. She said that it was wonderful, and she was overwhelmed with emotion. The principles of Truthfulness-Compassion-Forbearance touched her heart. She said, “If everyone had honesty and kindness, we would all be better off.”

“Falun Dafa’s principles of Truthfulness-Compassion-Forbearance are amazing,” Rebecca said. “If we all followed them the world would be a pleasant place. We all need to do a little more in every way.”

Bob said, “I know that the CCP has been persecuting Falun Dafa, and I have also seen practitioners protesting everywhere.”

He said, “I support freedom of belief, that’s why I support Falun Dafa practitioners. I advise people who have been brainwashed by the CCP outside China to learn more about things you don’t know.”

Lucie Delrreo said that the march peacefully conveyed the message of Truthfulness-Compassion-Forbearance. “It’s very important to humans,” she said.

Jiang Zemin, former head of the Chinese Communist Party, perceived the spiritual discipline’s growing popularity as a threat to the CCP’s atheistic ideology and on July 20, 1999, he issued an order to eradicate the practice.