(Minghui.org) Falun Dafa practitioners from all parts of the country gathered in downtown Sydney for a grand parade on October 7, 2022. Local residents and tourists stopped to watch and take photos. Many people praised the event.

A retired couple said, “It was a beautiful miracle.” A human rights expert praised the peaceful resistance against the persecution and thought the values of Truthfulness, Compassion, Forbearance passed on by them are an antidote for problems in the world today.

A business owner and two tourists from Adelaide thought the message communicated by practitioners was important because a greater force of justice can only come about to end the atrocities when more people know the truth. 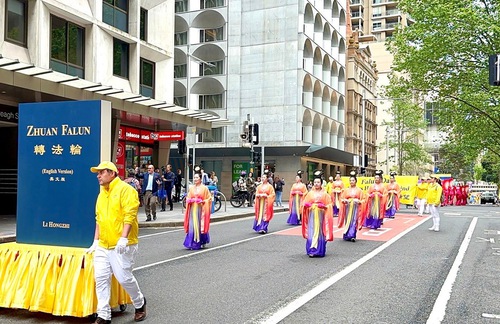 Allan and Gale are from Nelson Bay in North Sydney. Gale is a retired dance teacher while Allan owned a factory before he retired. Both of them were delighted when they saw the grand parade in central Sydney.

Gale said, “A truly beautiful miracle! The weather forecast said that there would be a one hundred percent chance of rain today. But the weather is great. It must have something to do with Falun Dafa. There are so many practitioners here, it is a beautiful scene on the streets!”

Allan said, “The performance by the Tian Guo Marching Band is majestic, the dragon dance is golden and shining, and the costumes displayed are colorful.”

They found it unbelievable when they learned of the persecution in China.

Gale said, “The Chinese Communist Party (CCP) is actually suppressing such an amazing practice like Falun Dafa. This is truly absurd and unacceptable. The brutalities must end!”

Truthfulness, Compassion, Forbearance Is Extremely Important to This World

David Lee is an expert in human rights and works in an NGO. He said, “The parade is amazing. The values of Truthfulness, Compassion, Forbearance conveyed by Falun Dafa practitioners are extremely important in this world. There are so many bad people nowadays, these values are an antidote.

Mr. Lee said he supports Falun Dafa practitioners’ peaceful resistance and hopes the persecution ends soon. He said, “The CCP should not persecute Falun Dafa. One cannot imagine suppressing such a beautiful organisation of faith in a democratic country, this is a huge human rights disaster.”

People Need to Know the Truth About Falun Dafa

Catherine works in a store and Jemima works in the education sector. They came to Sydney from Adelaide for a holiday. They were excited to see the practitioners’ parade and kept taking photos of the event.

Catherine said, “This is a great parade, the message on the banners are well said – the world needs Truthfulness, Compassion, Forbearance.”

When they read the banners and learned of the ongoing persecution by the CCP they were astounded.

Jemima said, “This is the first time we heard that the CCP is persecuting Falun Dafa. The truth you communicate is very important, people need to know the facts and it is crucial to ending this persecution!”

Both of them said they will share the video they recorded on their social media platforms so that more people will be aware of the persecution.

Falun Dafa Has Brought a Beautiful Day to This City

Charley who owns a plastic products manufacturing company stood watching the parade for a long time, admiring the performance. He said, “This parade is spectacular. Falun Dafa has brought a beautiful day to this city.”

He said the CCP should not suppress Falun Dafa. “I have several Chinese friends and I’ve been to China. The people there are friendly but the government is bad. The regime’s violation of human rights is not only a threat to its people but to the whole world as well.

“Fortunately governments in many countries are gradually realising the evil nature of the CCP. However, the action taken against it is not enough. This is a major, systematic problem and it takes time. The truth you pass on is particularly important. Only by letting more people learn the facts can you amass a greater power of justice and disintegrate the CCP,” Charley said.