Skip to content
Oct. 10, 2022 | By Minghui correspondents in Sydney

(Minghui.org) Several hundred Falun Dafa practitioners did the exercises together in the centre of Sydney on the morning of October 7, 2022.

The morning group practice kicked off three days of activities, including a rally and march. This was the first time that Falun Dafa practitioners from all over Australia had gathered in Sydney since the pandemic. They also held the annual Australia Falun Dafa Cultivation Experience Sharing Conference over the weekend.

The peaceful exercise music, the bright and eye-catching yellow shirts, and the conflict-free exercise movements drew the attention of tourists and local people alike. Many people expressed a strong interest in learning the Falun Dafa exercises. 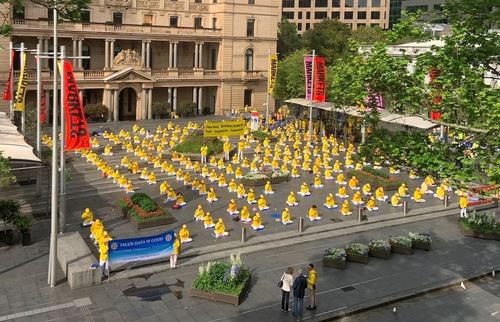 “I feel strong energy and kindness,” Sydney resident John Carlo Garza said when watching the Falun Dafa practitioners exercise. “I feel they [wearing yellow shirts] are like the golden sunlight breaking through the dark clouds.”

Garza said that communism was evil, and he completely opposed the Chinese Communist Party’s (CCP) brutal persecution of Falun Gong (also called Falun Dafa). He said, “The communist regime should be dismantled.”

“In a busy life,” she said, “being able to meditate like them even for a short while should bring peace and tranquility to the body and mind.” She said if people followed the principles of Truthfulness-Compassion-Forbearance, then the community we live in would be better.

She continued by saying, “It makes me sad to hear about the persecution of Falun Gong in China. It is unprecedented that there is such a severe persecution perpetrated in China. Because such news is rarely seen in the media, events like this are a reminder to the [Australian] people – all these sad things are still happening in China.”

Tourist: They Spread the Power of Kindness

Leah Baker saw Falun Dafa practitioners meditating for the first time that day, and paused to watch the peaceful scene. She said, “I stopped jogging, and took a closer look. I immediately felt a wonderful energy, which is pleasing.”

Baker said she had heard some talk about the persecution in China, as she had Chinese friends.

She also said to a practitioner, “The weather forecast predicted that there would be rain until sometime later today. But you are lucky, the sun has come out. So God blesses you.”

What Is Falun Dafa and Why Is the CCP Persecuting It?

Falun Dafa (also known as Falun Gong) was first introduced to the public by Mr. Li Hongzhi in Changchun, China, in 1992. The spiritual discipline is now practiced in over 100 countries worldwide.

Millions of people who have embraced the teachings–which are based on the principles of Truthfulness, Compassion, and Forbearance–and learned the five exercises have experienced improved health and well-being.

Under Jiang’s personal direction, the CCP established the 610 Office, an extralegal security organization with the power to override the police and judicial systems and whose sole function is to carry out the persecution of Falun Dafa.