(Minghui.org) Falun Dafa practitioners arrived in Madrid city centre’s Kayal Square on the morning of September 17, 2022. The practitioners displayed their truth-clarifying banners and exhibition boards to raise awareness of the persecution and to promote the message, “Help End the Live Organ Harvesting That is Currently Happening in China” and “Call for the CCP to End the Persecution of Falun Dafa.” 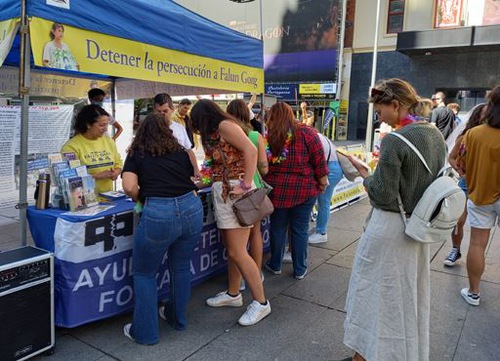 Jose Luis passed by the square and said with a sigh, “If not for you all, I would never have learned about this persecution.

“I personally respect everyone’s human rights. Depriving a person of his human rights is equivalent to taking his freedom. No matter where we are, which corner of the Earth, we should all respect these kind of basic rights.”

Jose also said that as an individual and as a country, everyone should take action to spread the truth and expose the lies and the persecution.

“I can’t believe this; these people are just practicing their belief and they are also not hurting anyone, but they are suffering from such cruel persecution,” he said. “Furthermore, this persecution has been going on for 23 years.”

Daniel also said that although it is not easy to oppose a dictatorship like the Chinese Communist Party (CCP), it is not impossible. The first step is to spread the truth and let the truth become widespread. Then more people could step forward to object to these types of criminal acts, and people would also be clearer about what is happening in the current CCP regime.

Daniel’s friend, Cuomo, said, “This is inhumane. They (CCP) have no right to harvest organs from people while they are still alive. They all the more do not have the right to deprive people of their beliefs.”

Roxana and her husband, who are from Venezuela, both signed the petition to show their support for Falun Dafa and ending the persecution. Roxanne said, “We really find it hard to believe that promoting the principles of Truthfulness, Compassion and Forbearance would be banned by the CCP. Matters like live organ harvesting are definitely non-tolerable. This matter is really very serious, extremely serious.

“Venezuela is also under a dictatorship regime, so we can understand your feelings. We will forever support you all. We should be like you Falun Dafa practitioners, walk on a correct path, not to use violence and persist on. In this way, we will definitely achieve our goal. Our whole world needs more peace and compassion.”

Seti from Iran said that Falun Dafa’s music drew her to the exhibition booth. She said that her mother practiced Taichi for many years, so she would definitely very much want to learn Falun Dafa.

“I do not dare to believe the cruel persecution that I have just heard about, which the Falun Dafa practitioners are suffering in China,” Seti said. “I do not dare to believe that this government is committing such violent acts. I do not know if live organ harvesting is still happening there, but this is a criminal act, it is totally a criminal act. The Chinese (CCP) government does not have the right to do this.”

Lilia Benakarcho from Paris was on a vacation in Madrid. When she stopped by the exhibition booth and heard about the persecution that Falun Dafa practitioners are currently facing in China, she said, “I feel sad for these people who are being persecuted. These victims of live organ harvesting really need the help of governments all over the world. We must push this matter forward, through more discussion about this topic on social media, television programs and media so that more people’s souls can be triggered to feel the urgency to help these people who are being persecuted.”

Lilia Benakarcho from Paris said she would try her very best to help end this persecution and the criminal acts of forced organ harvesting in China.

“Currently, the CCP regime is a very harmful system. Something really needs to be done for the folks in China. I feel sad for them because I know that many of them have already lost their lives,” Lilia said.

She said that she will spread information about the persecution through her social media accounts.