(Minghui.org) Falun Dafa practitioners held a series of activities in the Plaza del Callao in Madrid’s city centre and outside the Chinese Embassy in Spain from July 16 to 20, 2022. They clarified the truth and peacefully protested the Chinese Communist Party’s (CCP) 23-year-long persecution. They also called for an end to the persecution and the disintegration of the Party.

Under the scorching sun on the morning of July 16, practitioners put up display boards in the Plaza del Callao with information about how Falun Dafa is practiced across the world and detailed the CCP’s persecution. Many people stopped to read the information and signed the petition calling for the persecution to end. 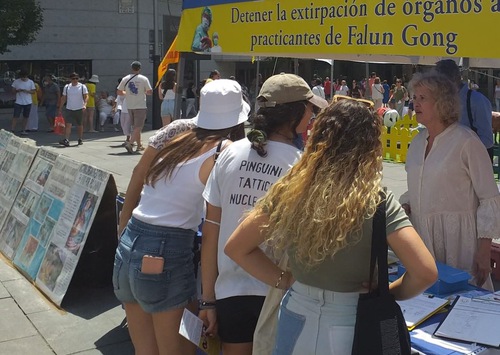 Nicolás from Argentina noticed the truth-clarification activity when he walked by. After learning about the persecution, he said, “It’s all too terrifying. I can’t understand why the CCP reaches such an extreme situation and has lost respect for people.”

He said that he had seen a body exhibition (of plastinated people) a few years ago. What impressed him was that at the door of the exhibition, a protester said the corpses were people who were detained for their religious beliefs in China. He didn’t pay much attention at that time, but now he understands that all this has something to do with the CCP’s crime of live organ harvesting, which is absolutely unacceptable.

Before leaving, he said that everything the CCP does is to destroy humanity, and he hopes that the CCP will never succeed.

After learning about the CCP’s atrocities, Concepción said, “This is inhuman, it violates all laws. The CCP officials (participating in the persecution) are simply not human in my opinion.” She signed the petition calling for the persecution to end and said she would tell her family and friends about the persecution.

She said she was interested in Falun Dafa and planned to go to the local park to learn the exercises.

Vanesa, a 22-year-old college student, said after learning about the persecution, “This is not only sad but also shocking. The shocking part is that no one has spoken out for the victims. The mainstream media in today’s society are all motivated by interests.” She said that she would help spread the information about the persecution. “Social media is one of the good tools. In this way, one can also contribute to stopping the persecution.”

Rally Outside Chinese Embassy in Spain

Practitioners from different regions in Spain held a peaceful rally in front of the Chinese Embassy to call for an end to the persecution on the morning of July 20. Pedro Requejo and Francisco José Contreras, Members of the Congress of Deputies, sent letters to voice their support.

Mr. Contreras stated in his letter, “We hope to express our support for the protest to the CCP’s persecution. We call on the international community to pay attention to and stop the persecution of Falun Gong, especially to stop the inhumane live organ harvesting.”

Practitioners set up banners and display boards across from the Chinese Embassy. The eye-catching banners drew peoples’ attention, and many stopped to read the display boards and took flyers. Although many passing motorists were unable to stop, they pressed their car horns to show their support. 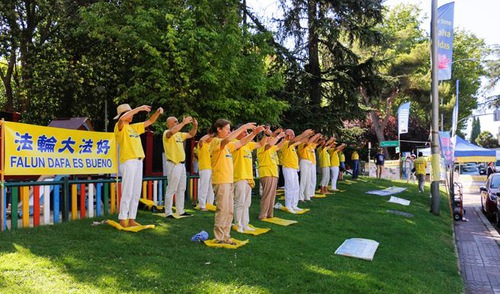 After reading the display boards in front of the embassy, Bibiana said, “This kind of thing happening in China is appalling and must stop immediately. To stop it (persecution), it is necessary to spread the truth to the people. Our government should help end the persecution.”

Diana was appalled when she learned about the CCP’s persecution and live organ harvesting in China. She said, “It’s unbelievable that something like this happens in the era we live in. I know the CCP regime is a dictatorship, and I also know how the CCP controls its citizens online.

“The Chinese people don’t have any freedom to get real information. China is a closed society, and it is difficult for news to spread truthfully. It can be seen from the pandemic situation that the news inside China is distorted. Terrible things have happened in China, but by the time we know the truth, it is already too late, the virus spread.”

Talking about organ harvesting, she said, “This is murder. I have never heard of it. I’m speechless. If you want to change the status quo, China must be transparent, which is difficult for a closed China. But each of us who knows this issue needs to take the initiative to spread the truth so that things can develop in a positive direction.”

Kenia from Cuba said that she had seen practitioners’ signature collection a few years ago. Regarding the nature of the CCP, she said, “Cuba, like China, is controlled by a dictatorship. In Cuba, people are imprisoned for opposing the government. The same is true in China.

“Communism does not work, not now, not in the past, and not in the future. There is not even basic freedom of speech. Everyone should be free. Like the Cubans, the Chinese need the world’s help. The world’s people must see these crimes, only by doing so is their hope that this will change.”