(Minghui.org) Falun Dafa practitioners from Quebec, Canada recently introduced the spiritual practice in several areas in the province. Many people expressed their interest to learn Falun Dafa. In order to meet the needs, two new group practice sites were opened in two cities, and free teaching is offered.

Falun Dafa practitioners participated in the Victoriaville Peace Festival on September 25 and 26. The event is popular locally, and has been held year after year for 12 consecutive years. When Falun Dafa practitioners first participated in this activity 3 years ago, many locals wanted to learn the exercises. Thus, the 1st group practice site was established in a small town outside of Victoriaville.

This year, as in previous years, the organising group set up the Falun Dafa booth near the entrance of the exhibition.

Ms. Anne Beaumier of the organising group said: “Falun Dafa is precious. Every year, I ask to set up the Falun Dafa booth near the entrance. That is because I find that when people arrive at the event, they feel an incredible peaceful energy. I feel like the Falun Dafa booth was like an anchor, creating a protective, very peaceful (energy) dome for our event. I’m so thankful for you to be here.” 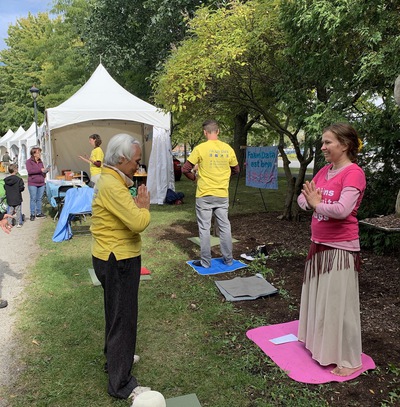 Many people condemned the persecution in China. Marie-Michelle said that when she was studying in Montreal, she often saw Falun Dafa group practice in Chinatown. From there, she learned a lot about Falun Dafa. She was very happy to come across Falun Dafa again.

“Falun Dafa helps oneself and others find peace,” she said. “The CCP wants to eliminate it because people would not follow the dictates of the Party if they have freedom of thought. I support you and your effort protesting the persecution.”

Falun Dafa practitioners also participated in the Ecosphere in Magog in the city of Magog in eastern Quebec on September 25 and 26. Many wanted to learn the exercises on the spot.

Some of them said that they were moved after being told about the benefits one experiences when practicing Falun Dafa. Others heard of Falun Dafa in different places. A couple met Falun Dafa practitioners at a rally in Beauce, Quebec this past summer, where they were introduced to the practice. They asked where they could participate in a local group practice site.

In order to meet the needs of the public, practitioners in Sherbrooke will open a new practice site, beginning on October 16, and offer free teaching.

Falun Dafa practitioners introduced the practice in the tourist town of Saint-Sauveur, Quebec at the end of August.

Lise Heafey, a 75-year-old retired school bus driver, was introduced to Falun Dafa for the second time, and she was happy about this.

Heafey told a practitioner that she saw Falun Dafa practitioners doing the exercises on the sidewalk in front of the church this past summer, and she was interested in it. So she took a Falun Dafa flier home to show her daughter. Her daughter told her that she had already learned the exercises online and practiced every morning or evening. Her daughter also said that after doing the exercises, she felt healthier and could relax, and it also helped to maintain her body shape.

Afterwards, Heafey got a video from her daughter and learned the exercise by watching a video. “I feel that it is very helpful,” she said. “I have been practicing it and meditate every night before going to bed to calm down my mind and sleep better.”

Background: What Is Falun Dafa and why is the CCP persecuting it?

Falun Dafa (also known as Falun Dafa) was first introduced to the public by Mr. Li Hongzhi in Changchun, China, in 1992. The spiritual discipline is now practiced in over 100 countries and regions worldwide.

Jiang Zemin, former head of the Chinese Communist Party (CCP), perceived the spiritual discipline’s growing popularity as a threat to the CCP’s atheistic ideology and on July 20, 1999, he issued an order to eliminate the practice.