(Minghui.org) Practitioners participated in the 21st Irvine Global Village Festival on October 8. They demonstrated the Falun Dafa exercises, told people how the Chinese Communist Party (CCP) persecutes the spiritual practice, and collected signatures on a petition to end these egregious human rights violations.

The Irvine Global Village Festival originated from the efforts of a small group of community residents more than 20 years ago, and over the years has become the city’s most important annual civic event. Local government departments, non-governmental organisations and enterprises set up more than 170 booths to display the ethnic culture of more than 50 regions. Local groups performed on five stages, and approximately 10,000 people attended the event. 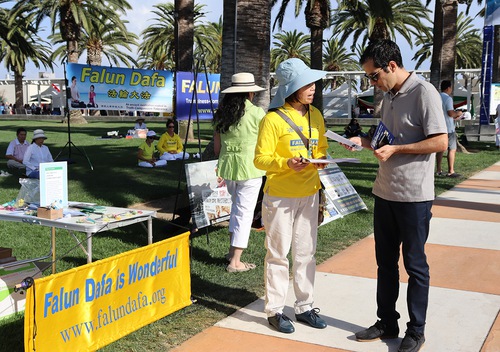 The practitioners’ stand was located in the Palm Court, where the cultures of various ethnic groups were displayed. Some practitioners demonstrated the exercises, some introduced Falun Dafa to visitors, and others collected signatures to demand an end to the CCP’s persecution.

Christine Connor, who started practicing Falun Dafa 11 years ago, said, “Falun Dafa is based on the principles of Truthfulness-Compassion-Forbearance. We practice the exercises at three locations including Laguna Beach every Saturday and Sunday morning.”

Connor said that she first heard about the CCP’s persecution of Falun Dafa, how practitioners in China were detained and tortured, but they still continued to practice. This made her want to learn why they were so steadfast. After looking into Falun Dafa, she decided to practice.

She said that Falun Dafa changed her life, making her more compassionate and wanting to improve herself and be a better person. Practicing has also made her healthy and younger looking.

The practitioners also placed two banners on the lawn next to the main entrance of the park, and placed several oil paintings from the Art of Zhen Shan Ren Exhibition near the sidewalk. They also had petition forms and paper lotus flowers available on a table nearby.