(Minghui.org) Falun Dafa practitioners were once again invited to participate in the Granny Smith Festival on October 15. One of the largest street festivals in Sydney, the event was paused for two years due to the pandemic. After resuming this year, it attracted over 90,000 spectators and many of them applauded the practitioners’ performances.

When practitioners passed the stage, the event host introduced Falun Dafa and said it is a self-improvement system based on the traditional values of Truthfulness-Compassion-Forbearance. “It has improved the minds and bodies of millions of people,” he explained.

In the afternoon, practitioners were invited to demonstrate the exercises on the stage. Once again, the host explained to the audience how the practice benefits people both physically and mentally.

One practitioner explained the movements, said the exercises were easy to learn, and invited people to come to the local practice site: “Falun Dafa is well received by the public and has attracted people from over 100 nations. One can learn the exercises for free online at www.learnfalungong.com or at the park near Eastwood Library from 6 to 8 every morning.”

A Beacon for Society

After signing a petition, Brick Lee thanked practitioners for bringing the information. “It is great that you have brought something so wonderful here. It is totally wrong for such a good practice to be suppressed in China,” he said.

The Chinese Communist Party (CCP) is notorious for persecuting innocent people and he feels this is why the international society should not ignore this severe human rights abuse. “Everyone should have the freedom to choose what he or she wants to do, be it walking, meditation, or anything else,” he said.

The Persecution Is Horrible

Mary Neerar came to the booth and signed the petition to end the persecution in China. She explained that many years ago she met an elderly Falun Dafa practitioner who was meditating. “She told me what the practice is and how practitioners are mistreated in China for their belief,” she recalled. “I did not think something so horrible could happen and I absolutely stand with you against the persecution.”

Ms. Neerar said the practitioners’ performance was excellent. “I hope you will participate in more events like this around the world. As more people wake up and join the efforts to oppose the CCP, the brutality will end,” she said.

Carmen is a volunteer for a healthcare booth nearby. She said that coworkers from China told her about Falun Dafa and the persecution. “I’ve also seen a practitioner’s booth at a shopping mall,” she said.

She liked the exercises very much. “The principles of Truthfulness-Compassion-Forbearance are so amazing. If more people follow them our society will be better,” she added.

“Thank you for sharing the information here. This is important because people need to know what is going on in China,” she said. 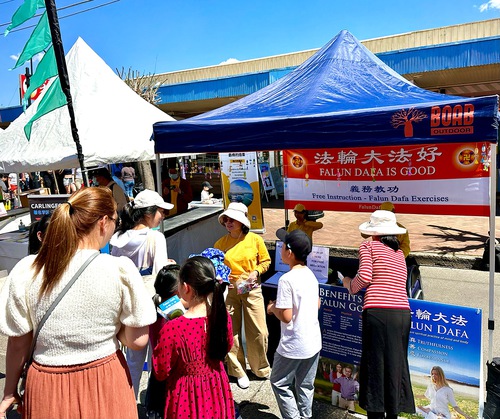 Thanh Nguyen is a local resident and she talked with a Vietnamese practitioner. Having heard about the persecution on the radio many times, she felt sorry for the mistreatment that practitioners had suffered in China for their belief.

She also admired practitioners for their peaceful mindset during this harsh persecution, as well as their determination in their faith. “I also plan to learn Falun Dafa. It may not be easy to follow the principles of Truthfulness-Compassion-Forbearance all the time, but it will help us a lot,” she said.

A man took videos and many pictures of practitioners’ performances, especially the Tian Guo Marching Band. When he learned that all the band members practice Falun Dafa, he was interested in learning more and asked several questions.

“The principles of Truthfulness-Compassion-Forbearance are universal values,” he said. “I think we should cherish them because they apply to everyone.” He explained that although this was the first time he heard about the suppression in China, it is wrong to persecute practitioners, “In fact, I think Truthfulness-Compassion-Forbearance are true, noble values that we should adhere to.”