(Minghui.org) The 2022 Taiwan Falun Dafa Youth Winter Camp was held at TransWorld University in Yunlin on February 8-10. Students from Taiwan and overseas experienced the beauty and purity of Dafa while reading teachings by Master Li Hongzhi and sharing their understandings from cultivation practice.

There were also some young students who had slacked off and only recently returned to practicing Falun Dafa. After the camp, everyone said that they wanted to come back next time. 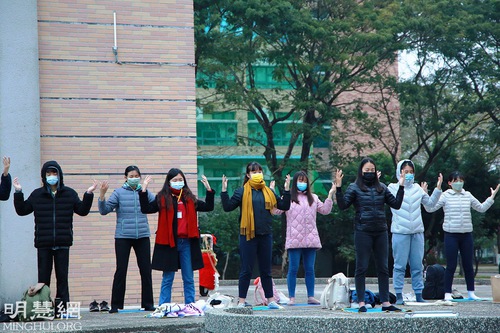 Xiaoru (pen name) is a foreign exchange student and a first-time attendee of the youth camp. She recalled a dream she had after watching film “The Eternal Story” when she was little.

In the dream, a high-level being came to her through layers of the universe, and she saw that the Earth was surrounded by a thin, bright film. He transformed into a small angel, warm and passionate, and stayed by her side for a day. She was surrounded by a warm and peaceful atmosphere that day. If her behavior, words, or thoughts were not right, the angel would know and would peacefully correct her.

At the end of the day, the angel told her he was going to leave her. “He said his life was only one day. As he disappeared, the bubble of peace that surrounded me slowly faded away,” Xiaoru recalled in tears.

Her memory from long ago was awakened by the film during the winter camp, and she remembered her mission and responsibility. “That little angel chose me, but I was lost in ordinary society and was not diligent in my cultivation.” She became determined to be diligent again and fulfill her prehistoric vow.

“Master never gave up on me”

After returning to Taiwan following graduation from The University of British Columbia in Canada, Hsuan-hung joined a translation team for the English Epoch Times, where he connected with many Falun Dafa practitioners and realised how slack he had been in cultivation.

He practiced along with his mother when he was a child. As he grew older, schoolwork and the temptation of social activities caused him to drift farther and farther from cultivation.

Hsuan-hung said that the three days and two nights of Falun Dafa study and sharing were very fulfilling, and the environment was very pure. He had no distracting thoughts, and the camp helped people become more diligent and expose their deeply concealed attachments. The camp allowed attendees to see their shortcomings and attachments, and the campers also pointed out attachments to each other, so they could see the gaps between themselves and fellow practitioners. Overall the camp helped the attendees become more diligent and catch up quickly.

Hsuan-hung believes the camp was a rare opportunity for young practitioners to gather together, and he cherished it very much. “No matter how slack I was or how far away I drifted, Master never gave up on me and has been waiting for me to come back.” After returning to Taiwan to practice Falun Dafa again, he deeply felt Master’s compassionate protection, and he hoped to become more diligent to thank Master Li for his grace.

“In my country, there is no environment like this for Fa-study and sharing, and I was practicing on and off,” Xiao Fang said. She arrived at the camp with no book and no practice mat, and another student silently gave his to her. He sat on the cold wood floor without a practice mat for three days. “His actions broke my notion of selfishness,” Xiao Fang said.

After watching “The Eternal Story” Xiao Fang’s eyes turned red and she said that she deeply felt that Master used this video to remind her that “it’s time to come back.”

Li-Chih, a junior from Taichung Xinshe High School, participated in the camp for the first time. She had practiced along with her parents when she was a child, but as she grew older she truly wanted to practice cultivation. She said she learned how to truly look inward during Fa-study and sharing with the other students, and she was shocked to discover that she used to think her xinxing was superior to other people, but she had been measuring herself based on the standards of ordinary people.

“The whole place was very peaceful, and I wanted to bring this atmosphere home,” she said, “I saw the students in their lives with their sincere selflessness. It is a compassion that comes from the heart and the xinxing level and realm naturally manifested in the behavior of true cultivators.”

Li-Chih’s severe atopic dermatitis disappeared after she started practicing Falun Dafa. “Master purified my body for me, but I was not diligent and didn’t cherish it. I didn’t know how to be grateful when I was blessed. I feel ashamed, but Master still treats me with the same compassion. Thank you Master for not giving up on me!” she said.

This was also the first experience of youth camp for Wei-Hua, who made an observation about her cultivation state.

She admired the practitioners in China who are persistent in clarifying the truth in a very difficult and dangerous environment, and she felt guilty for living a comfortable life in Taiwan and for slacking off in cultivation. She shared an unforgettable experience about a time when she felt very negative and helpless, and even wanted to give up. She heard a voice from another dimension that kept echoing in her ear, “Come on! Come on!…” The voice continuously cheered her on and encouraged her. “I felt that the whole field lit up. I was surrounded by warmth. I was very touched,” Wei-Hua recalled.

“Master didn’t give up on me. I must cheer up and I can do better,” she added.

“Keep a pure and peaceful mind, and practice in day-to-day life”

Shao-chun received a flier introducing Falun Dafa while he was volunteering at a community event, and he started to practice cultivation. He had wanted to attend the youth camp for a long time, but because of his work he could not. This year, he requested vacation time from his government agency so he could attend the youth camp.

“Nowadays, society is chaotic and disorderly. It is really rare to have such a cultivation environment where my mind is very peaceful,” Shao-chun said.

He realised that the biggest reward for all camp attendees was that everyone opened up their hearts, shared their experiences selflessly, and encouraged each other. He understood the profoundness and magnificence of Dafa, the meaning of cultivation, and how precious it is to have a human body that can cultivate.

“I hope I can do better in practice, maintain a peaceful and pure state in the future, align myself to the Fa, cultivate better, and help more people,” he said.

Xiao-ting, who has participated in several youth camps, said that group Fa study and sharing helped her realize that a lack of diligence would lead to the loss of many predestined people.

Xiao-ting was afraid of talking to people because of her poor language skills. At the camp, students were sincere with each other, which created a pure and peaceful field where she felt at ease. This helped her to break through her attachment of fear.

“When I was lost or not diligent, I looked back and saw that Master was still waiting for me, always by my side, always giving me another opportunity. Master’s orderly arrangements allow me to continuously improve. It is really valuable to be able to participate in such a camp, especially during the pandemic,” Xiao-ting said.

Chang-yi, who has attended summer and winter camps 19 times, said that the Fa study and sharing during the camps are very rare chances for young practitioners.

“We have a detached and pure cultivation environment in this ordinary people’s society, and we feel the indescribable beauty,” he said.

The youth winter camp provided attendees with three days and two nights of frequent Fa study, and the young students realized that they should no longer pursue comfort and slack off. They heard Master’s compassionate call. Through this event, they understood the value of being Dafa disciples, their responsibilities, and their missions.