(Minghui.org) Falun Dafa practitioners resumed activities to raise awareness in scenic sites after restrictions due to the pandemic were suspended in July. They held activities in Chinatown, outside of the British Museum, and on St. Martin Square every Saturday afternoon. People accepted fliers and signed a petition to condemn the Chinese Communist Party’s (CCP) persecution.

As more and more people are venturing out to these places, practitioners are greeting them with information about the benefits of Falun Dafa, how the CCP is persecuting the spiritual practice, and a hopeful message of how practitioners in China have stood up for their belief in Truthfulness, Compassion, and Forbearance.

A ten-year-old boy saw the information about the CCP’s organ harvesting and called his mother over to read it. After they quietly read the display boards they went to the table to sign the petition against the persecution.

A practitioner gave the boy a hand made lotus flower and he carefully held it. His mother asked whether they could donate money. The practitioners said, “You are really kind. No donation is needed. Thank you.” 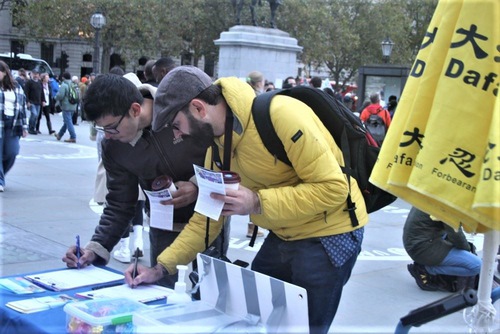 After a group of well-dressed people passed by, a woman returned and asked for a leaflet. She said, “I know this has been going on for several years. Thank you for your persistent efforts to speak out. It’s really important. Keep up the good work!”

John Stocks signed the petition and then said, “I don’t think everyone in the world understands what is happening now. How many people know that this kind of genocide is happening? Not many. Only you are here to tell us what is happening. People care more about money and business than human rights. This is the problem. The root cause is greed. But no power will last for long. I will come again next week.”