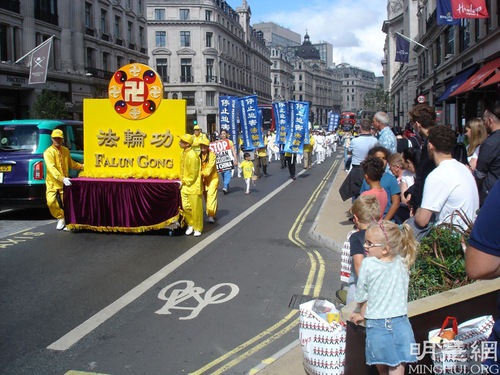 The parade, which began at 11:15 a.m at the Chinese Embassy, consisted of Falun Dafa banners, exercise demonstrations, replicas of the Falun Dafa books, waist drum performances, and signs decrying the persecution of Falun Dafa in China.

Many people along the route stopped to watch the procession, and several took photos and made recordings with their cell phones. Some even thanked practitioners by respectfully pressing their palms together in front of their chests.

A rally was held afterward on Parliament Square.

Mark from Liverpool stopped to watch practitioners doing the exercises, and stayed for a long time. He said that he occasionally saw practitioners’ activities in Liverpool. He thought the energy field was amazing and calming so he wanted to learn more about it.

Mark said he was interested in learning more about Falun Dafa and would read about it online when he returned home. He wanted to find a local practice site to learn the five exercises. He asked for more details about the persecution in China. Saddened to learn about the organ harvesting, he said, “I hope everyone can hear your voices.”

Falun Dafa (also known as Falun Gong) was first introduced to the public by Mr. Li Hongzhi in Changchun, China, in 1992. The spiritual discipline is now practiced in over 100 countries and regions worldwide. Millions of people have embraced the teachings—which are based on the principles of Truthfulness, Compassion, Forbearance and include five gentle exercises—and experienced improved health and well-being.

Jiang Zemin, former head of the CCP, perceived the spiritual discipline’s growing popularity as a threat to the Party’s atheistic ideology and on July 20, 1999, issued an order to ban the practice.

There is concrete evidence that the CCP sanctions the harvesting of organs from detained practitioners while they are still alive to supply the organ transplant industry.