(Minghui.org) Falun Dafa practitioners organised two Information Day events in Toulouse and Carcassonne on November 20, 2021. Many people learned about the persecution of Falun Gong, which was launched in 1999 by Jiang Zemin, then head of the Chinese Communist Party (CCP).

Toulouse has the fourth largest population in France, with Paris, Marseilles, and Lyon being larger. It is the capital of the European aerospace industry and home to the Airbus Commercial Aircraft Corporation and its Airbus Headquarters.

A passerby said he was very interested in Chinese culture, but he had never heard of Falun Dafa and the persecution. After signing the petition to end the persecution, he said, “It is very good for you to be here, and what you are doing is very positive. Thank you!”

The atmosphere became tense when five young Chinese people stopped in front of the display board. They denied the allegation that the Chinese harvests organs from living prisoners of conscience.

A Chinese practitioner told them about his own experience with Falun Gong, examples of practitioners being tortured in China, and the values of Truthfulness, Compassion, and Forbearance.

A Vietnamese practitioner said the CCP should not be put in the same category as Chinese people. “Today I am talking about the evil of the CCP,” he said. “I am Vietnamese. I had the same experience in Vietnam because it also is a communist system.” The atmosphere eased a lot.

These young Chinese finally understood that Falun Gong is good. They looked relaxed when they left and said a friendly goodbye to the practitioners. Then they strolled around the square before returning to the booth and calmly reading the brochures.

Located in the south of France, Carcassonne is famous for its medieval architectural castle. Carcassonne Castle is a UNESCO World Heritage Site.

Practitioners held a Falun Dafa Information Day event in front of the Portail des Jacobins. A lot of people came by because of the morning market. Practitioners demonstrated and introduced the Falun Dafa exercises to passersby. People were grateful to learn about the brutal persecution happening to practitioners in China.

People stopped by the information booth and talked about what they had learned about the CCP, including its repeated lies and its persecution of Falun Gong and other faiths and ethnic minorities.

Many people are now aware of the CCP’s cruelty, and they expect the situation to change quickly once the communist spectre is eliminated. Then, human rights, human dignity, and freedom of belief will return to China. 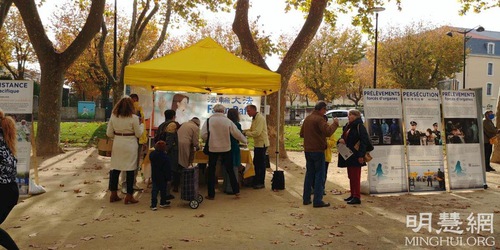