(Minghui.org) Today’s news from China includes incidents of persecution that took place in 20 cities or counties in 11 provinces, where at least 37 practitioners were recently persecuted for their belief. 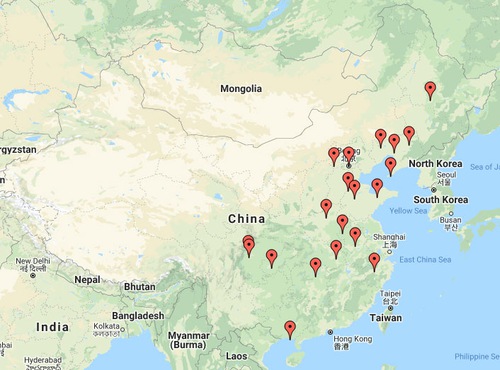 Ms. Zhao Yulan, 81, was brutally abused in Liaoning Women’s Prison. The inmates stripped off her clothing and pasted words slandering Falun Gong’s founder on her body. The inmates also force-fed her unknown drugs. Prior to this term, Ms. Zhao served two prison sentences, totaling 9.5 years, for her faith.

Ms. Jiang Wei, from Chaoyang District, serving a 12 year term for her faith, was injected with unknown drugs. People heard her screaming while she was being tortured.

Ms. Wang Lidong, 45, incarcerated in the same prison, is disabled. Her husband is detained in another prison.

When Mr. Liu Xiyong, 80, was released from Dongling Prison in Shenyang City on April 9, 2021, he was directly taken by officers from the Paotai Police Station and put into the Sanli Detention Centre in Jinzhou District, Dalian City. Mr. Liu suffered from pleural effusion as a result of abuse and torture in the detention centre.

On September 3, the detention centre took him to the Jinzhou Traditional Chinese Medicine Hospital. On September 28, Mr. Liu was taken to the Dalian No. 3 Prison because he did not give up his faith in Falun Gong.

On November 13, Ms. Zhang’s family learned that she had trouble eating because she was not allowed to wear her dentures.

On November 25, 2012, Huang Xiaoxiao, from the Jiangbei District Court, issued an indictment against Mr. Chen Mingxi.

Mr. Chen, who is disabled after being repeatedly tortured in a forced labor camp in 2000, was arrested on June 8, 2021. Due to his high pressure he was placed under residential surveillance for six months.

Mr. Li Jiwu, from Yushu Town, Daoli District, was arrested from home on June 10, 2021 by officers from the Daoli District Domestic Security Division. Mr. Li’s wife, who was bedridden and unable to take care of herself, was left unattended.

On the same day, officers from the Daoli District Domestic Security Division arrested Ms. Han Yaxiang and her husband, Mr. Zhao Junsheng, at their home in Xuejiatun Village, Xinfa Town, Daoli District. They ransacked the couple’s home. These three practitioners have since been detained.

Five officers in plainclothes led by officers from the Anjuyuan Community Management Office, Decheng District went to Ms. Zhao Yucai’s home on November 5 and 6, 2021, as part of the CCP’s “zero out” campaign. They asked if she still practiced Falun Gong and pressured her to sign statements renouncing Falun Gong, which she refused.

On November 10, 2021, an officer from the Dezhou District Police Station called Ms. Zhang Wenyan’s husband and asked if she still practiced Falun Gong.

On November 22, Ms. Li Junping’s husband received a call from the community management office requesting her to sign the guarantee statement renouncing Falun Gong. They went to her home and harassed her the next day.

On November 23, 2021, Mr. Mo Xinzhong from Xiajin County was tried by the Dong’e County Court in Liaocheng City.

Li Yuangang, Party secretary of the Baihe Community, called Ms. Zhou Liangying’s son on November 15, 2021 and told them to go to the community office. The next morning, as soon as Ms. Zhou and her son got there, more than ten officers surrounded them and pressured Ms. Zhou to sign a guarantee statement renouncing Falun Gong, which she refused. They then took Ms. Zhou’s son to the Pengzhou City brainwashing centre. Seven or eight of them forcibly pressed her fingerprints on the statement.

The same day, Xiao Yijun went to Ms. Liu Yingjun’s home and pressured her to sign guarantee statements, which she refused. He then went to Ms. Chen Yuanfen’s home, saying that her children would lose their jobs if she did not give up her faith in Falun Gong. Ms. Chen did not sign.

Ms. Jiang Xiumin, from the Xiaoliying Village, Santa township, has been repeatedly harassed by Party secretary Zhao Peng and officers from the Santa Police Station. In November 2021, the local government officers from Santa Township, Taihe County, and Fuyang City, harassed Ms. Jiang several times. They pressured her to renounce Falun Gong, saying that her children would lose their jobs and be expelled from school if she did not give up practicing Falun Gong.

Mr. Sun Yufeng, from Shuangfu township, has had his pension suspended since 2014 because he didn’t give up his faith in Falun Gong. In September 2021, an officer surnamed Li, from the Taihe County Police Department, went to Mr. Sun’s home. He harassed him and attempted to take his cell phone. On October 11, Li went to Mr. Sun’s home again with another officer. They forcibly took his cell phone.

Officers from Mengyang township, including the Party secretary Daiyang, went to Ms. Zeng Qingfang’s home on November 24, 2021. They asked if she still practiced Falun Gong and if she distributed Falun Gong information. They also asked Ms. Zeng to sign the transcript, which she refused.

On November 18, 2021, officers from the Jianping County Domestic Security Division and Kuidesu township arrested Ms. Feng Ruiying and ransacked her home. She is detained in the Xidayingzi Detention Centre.

Ms. Meng Meizhen, was told on November 16, 2021 to go to the local court. At the court, she was sentenced to three years and eight months in prison without a hearing. Ms. Meng was then sent to a detention centre, which refused to accept her because of her high blood pressure. She returned home the same day.

On November 18, 2021, Guo Yucheng from the 610 Office, together with two officers from the political and legal affairs committee went to Ms. Chen Shujun’s home and asked her to sign statements renouncing Falun Gong, which she refused.

On November 15, 2021, officers from the Wei County Domestic Security Division went to Ms. Wang Guiping’s home. They ransacked her home and confiscated her Falun Gong books, computers, printers, Falun Gong calendars, and money printed with Falun Gong information. Ms. Wang escaped while the officers were ransacking her home. She was arrested on November 22, 2021.

On November 21, 2021, officers from the Banlaman Town Police Station arrested Ms. Gao Shuhua on her way home. The next day, she was taken to the Jinzhou Detention Centre by officers from the Heishan County Domestic Security Division.

On November 9, 2021, seven or eight people from the Shijingshan District Political and Legal Committee, the director of the Wulituo Street Comprehensive Management Office, the Wulituo Street Police Station, pressured Mr. Liu Xingdu to give up his faith in Falun Gong, as part of the CCP’s “zero out” campaign. Six officers, including clerks from a brainwashing centre, harassed him again on November 12 and 18.

In November, officers from the Yuanjiang City 610 Office, the Police Department Domestic Security Division, and the Stability Maintenance Office harassed several practitioners as part of the CCP’s “zero out” campaign. They ransacked their homes and forced their families to sign guarantee statements renouncing Falun Gong on behalf of the practitioners. When the families refused to sign, they threatened taking them to the brainwashing centre. Ms. Zhang Meixiang is one of the practitioners being harassed.

On October 27, 2012, Mr. Jiang Fuxian, 86, was harassed by six officers from the Huabei Community Office and the Huachong Police Station. They went to his home and pressured him to sign guarantee statements renouncing Falun Gong, which he refused. They came again the next day and threatened to take him to a brainwashing centre.

Ms. Su Jinling, 70, was arrested recently. Her home was ransacked.

Ms. Zhang Xifeng, from Fenlu Town, Huangmei County, visited her daughter who lives in Wuhan city in mid-November 2021. After Ms. Zhang returned to her hometown, her daughter was arrested by officers from the police station near Jianghan University and interrogated for fifteen hours.

Officers from the Fenlu Township Police Station went to Ms. Zhang’s home several times and monitored her home. Ms. Zhang had to stay away from home to avoid further harassment.

– Falun Gong Practitioner Starved and Overworked in Prison Until He Collapses
– Seven Falun Gong Practitioners in Their 70s and 80s Arrested
– 81-year-old Woman Dies After Two Decades of Persecution for Her Faith
– Disabled Woman Persecuted After Finding Falun Gong and Breaking Free From a Miserable Life
– Additional Persecution News from China – November 26, 2021 (21 Reports)
– Liaoning Women Arrested at Home and Sentenced to Five Years for Reading Teachings About Her Faith