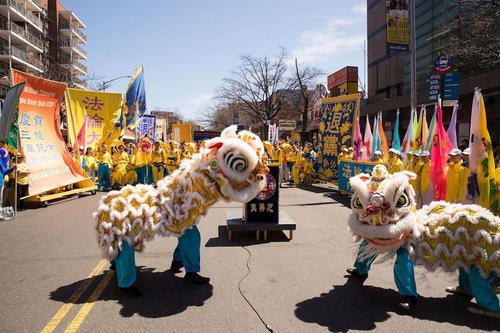 More than 1,000 Falun Gong practitioners held a parade and a rally in Flushing, the largest Chinese community in New York City, on April 22, 2018. The event was to commemorate practitioners’ peaceful appeal in Beijing 19 years ago, and to celebrate over 300 million Chinese people withdrawing their memberships in communist party organisations.

More than 400 Chinese people quit the Chinese Communist Party (CCP), the Youth League and the Young Pioneers during the celebration. As soon as the rally was over, a Chinese man from Yunnan Province walked to a bookstore nearby and bought a copy of the book Zhuan Falun.

New York State Senator Tony Avella sent a congratulatory letter to the event and attended the rally in person. He was happy to see 300 million Chinese people had quit Communist organisations in pursuit of freedom. He said he looks forward to the day when Chinese people would enjoy their constitutional rights and freedom.

He told the reporter, “In fact, 300 million Chinese people have left the Chinese Communist Party. It’s a signal that Communism doesn’t work. That’s what they are standing up for. I’m here to stand with them, even though it’s thousands of miles away.” 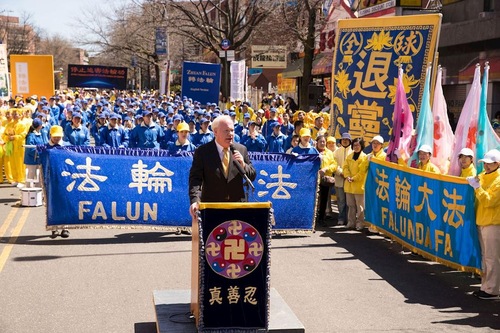 Community leader Ms. Martha Flores-Vazquez said at the rally that Falun Gong was non-violent and the Chinese people needed to hear the voice of these kind people. She said the persecution of this peaceful group was unacceptable. 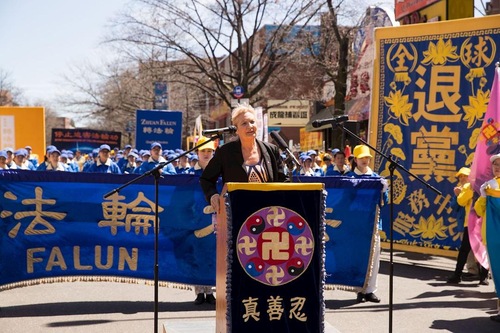 Ms. Yi Rong, chair of the Global Service Center for Quitting the CCP, said in her speech, “The CCP’s persecution of Falun Gong in the past 19 years has been a complete failure. The tide of quitting the CCP has risen rapidly, thanks to the sacrifice and hard work of Falun Gong practitioners and people of conscience.”

Mr. Zhang Lin, a democracy activist who had just escaped from China, said he was very touched by the rally and wished for justice for Falun Gong. He recounted how the Communist Party had brought catastrophes to the world, and praised the Nine Commentaries on the Communist Party and The Ultimate Goal of Communism for thoroughly unveiling the anti-human nature of Communism. Lin quoted a Chinese official who was in charge of the CCP’s family planning that at least 400 million abortions had been forcibly carried out, and at least 1.3 billion women had abortions under the CCP’s pressure. 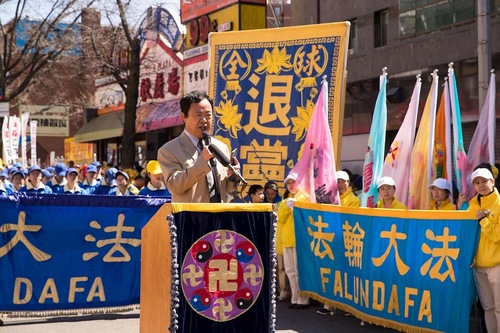 Mr. Liu Jianguo had worked as a driver for former major general of the Chinese People’s Liberation Army Xu Qingxian. As commander of the 38th Group Army, Xu refused the order to use force against demonstrators in Beijing during the 1989 Tiananmen Square protests and was jailed for five years as a result.

Mr. Liu had also personally witnessed Falun Gong practitioners’ peaceful appeal in 1999. He was amazed by how orderly the practitioners were during their appeal. Liu said he finally decided to quit the Communist organisations a week after he arrived in the States in 2017. 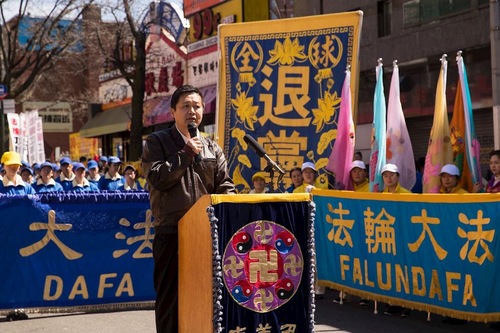 Mr. Liu Jianguo gives a speech at the rally.

Commentator Dr. Li Tianxiao said during his speech that the past 19 years recorded a history of the CCP’s sabotage of humanity and Falun Gong’s efforts to awaken those deceived by the Party.

The April 25 Peaceful Appeal was a starting point for Falun Gong’s mighty deed of safeguarding morality and leading people to a bright future. He encouraged fellow Chinese to take this last opportunity to cast away the CCP and welcome a new Chinese nation. 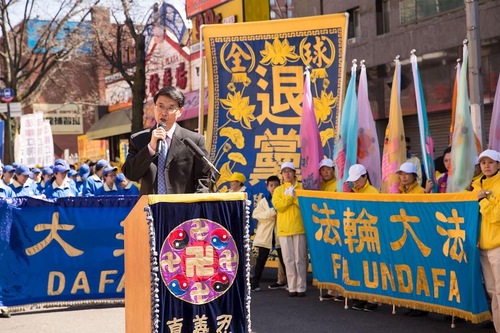 Dr. Li Tianxiao gives a speech at the rally.