(Minghui.org) The Art of Zhen Shan Ren (Truthfulness, Compassion, Forbearance) International Exhibition recently took place this October in two Mexican cities: San Pedro Cholula and Zacatelco. Local officials and visitors had high praise for the exhibitions, remarking that the artworks are much needed in today’s society. 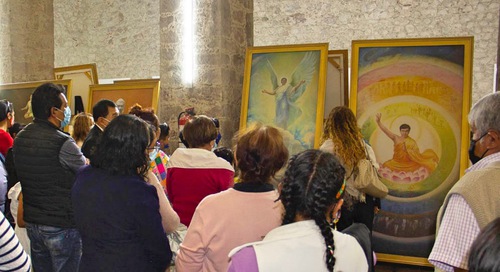 At the opening ceremony on October 7, officials from both the city of San Pedro Cholula and the state of Puebla thanked Falun Dafa practitioners for bringing them these great artworks and the information about the persecution in China.

“The suppression against Falun Dafa depicted in the artworks is shocking,” said Refugio Gallegos, director of the Cultural Affairs Bureau at Cholula. She that hoped more people could learn what is going on in China. In addition, she believed that such an exhibition is very important for society. “Peace and moral values are what our society is lacking. We need more of these values, especially young people and children,” she said. She encouraged practitioners to continue their efforts to expose the persecution.

Sandra Budar, director of economy and tourism in Cholula, visited the exhibition and said it showed the importance of freedom. “More importantly, we can become better citizens and help those innocent people who are suffering,” she added. She also pointed out that, “The values of Truthfulness-Compassion-Forbearance are critical for our daily life and they need to be passed on to the future generations.”

Luis Armando Olvera is mayor of Mitla in the state of Oaxaca. As one of the guests invited to the opening ceremony, he viewed the artworks and accepted materials about Falun Dafa. “Even though we live in this material world, in our heart we still want to be better citizens,” he said.

“I like this exhibition a lot,” said retired German banknote designer Manfred. “The Chinese Communist Party (CCP) wants to deprive everyone of culture, including Falun Dafa practitioners who are detained in labor camps.” He explained that in Germany he had seen practitioners peacefully protesting in front of the Chinese Embassy and heard about the CCP’s forced organ harvesting which targets practitioners.

Ignacio García, a retired Mexican admiral, said the principles of Truthfulness-Compassion-Forbearance apply to everyone and they are universal values.

Artist José Luis Montes, a painter, said he was fortunate to attend the event where he learned about the terror caused by the CCP. “There are no other places in this world that have this kind of cruelty. It is inhumane. I will highly recommend this exhibition to others,” he said.

Twenty-five miles northeast of Cholula is Zacatelco, one of the highest cities in Mexico with an altitude of over 2,200 meters. Several officials attended the opening ceremony and commended the event.

Iris Bringas came on behalf of the Mexican Vice Minister of Culture. “These pictures show mankind’s connection with the divine along with courage from those who are mistreated for their faith,” she said. “No persecution is justified, since we should all enjoy the freedom of belief,” she explained, adding she is opposed to any form of suppression.

Ms. Bringas said the exhibition is very impressive because it shows people beauty and pain as well as Truthfulness-Compassion-Forbearance. She was glad to see that many people responded so positively to the artworks.

David Diaz Orea, an architect, said that he found the exhibition to be very moving. “From these artworks, we can see their sorrow, kindness, and inner world – which is amazing,” he said.

Zacatelco is an important city in the state of Tlaxcala as well as nearby states, explained the city’s cultural centre director Cándido Portillo. “From the exhibition, one can tell the terror caused by the CCP, an extreme group that does not give people freedom.” He also thanked practitioners for promoting the principles of Truthfulness-Compassion-Forbearance.

“I am happy to see these artworks because they bring me a peaceful and calm mind,” said Efraín Ocotzi, secretary of the Tlaxcala Cultural Centre. “I hope the exhibition will continue and that more people learn about the persecution so that the brutality will stop.”