(Minghui.org) Falun Dafa practitioners participated in the XIV World Congress of Families Mexico 2022, which took place from September 30 to October 2 in Mexico City. They introduced the spiritual practice and raised awareness of the Chinese Communist Party’s (CCP) persecution.

This year’s World Congress of Families was held at the Santa Fe Exhibition Centre and featured more than 1,200 institutions. Over 80 people from more than 20 countries spoke at the event.

Many people who went to the expo were given Falun Dafa informational materials and learned about the meditation practice. Practitioners spoke to people from different backgrounds as well as members of parliament from different countries about the benefits of the practice in improving one’s physical and mental health. 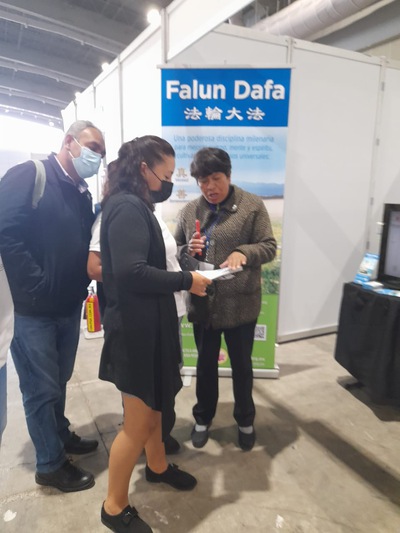 A couple with two children said that Falun Dafa was what they were looking for so that they could educate their children based on true, fundamental values.

Visitors were shocked to learn about the CCP’s persecution of Falun Dafa (also called Falun Gong). They expressed their concern and disagreement, calling for an end to the persecution so that the Chinese people could practice it without fear of repercussions.

Marco Respinti, an Italian journalist and editor of the online magazine Bitter Winter, said he could not visit China because his articles reported on how evil the CCP is, especially its persecution of Falun Gong practitioners. He said that Bitter Winter magazine is interested in publishing articles about the CCP’s organ harvesting from living Falun Dafa practitioners, “because many people all over the world don’t know about the CCP’s despicable act.”

“Any kind of persecution is bad,” a man said after learning of the CCP’s persecution of Falun Gong practitioners. “The persecution in China is a tragedy.”

A young woman said, “It’s ridiculous that people in China are persecuted for wanting to be good people. I think the CCP is violating human rights. I hope that everyone will spread the message.”

Falun Dafa (also known as Falun Gong) was first introduced to the public by Mr. Li Hongzhi in Changchun, China, in 1992. The spiritual discipline is now practiced in over 100 countries worldwide.

Millions of people who have embraced the teachings, which are based on the principles of Truthfulness, Compassion, and Forbearance. They have also learned the five exercises and have experienced improved health and well-being.