Skip to content
Oct. 13, 2022 | By the Minghui correspondent station in San Francisco

(Minghui.org) Falun Gong practitioners in Northern California were invited to participate in the 154th Italian Heritage Parade in San Francisco on October 9, 2022, and were warmly welcomed by the organiser and spectators. 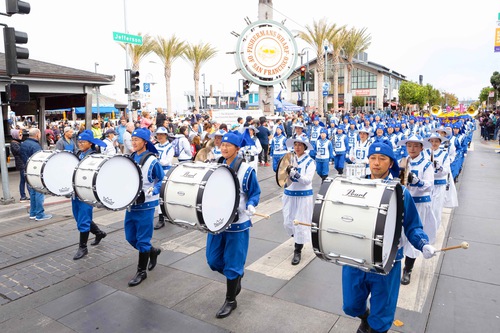 The parade started from Fisherman’s Wharf at noon and proceeded south through North Beach on Columbus Avenue and ended in Washington Square in San Francisco’s Little Italy.

The Falun Gong procession included the Tian Guo Marching Band, an exercise demonstration group and a float. Spectators waved to practitioners, applauded, took pictures and gave many thumbs up. 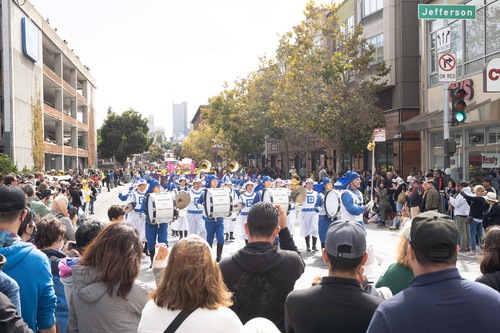 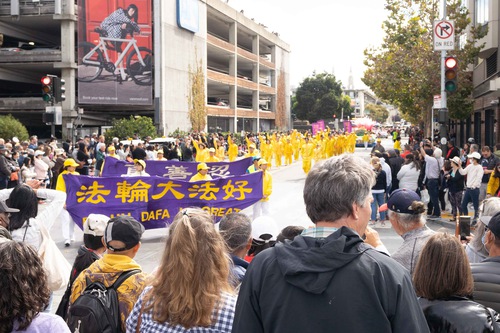 Jim Harvey, a trombone player who participated in the parade, had watched the Tian Guo Marching Band perform before the parade. He said that the band members had great skills, and he liked their performance very much.

“I read The Epoch Times every day,” Jim said. “I am familiar with Falun Gong. Falun Gong is good. I support the principles of Truthfulness-Compassion-Forbearance 100 percent.” He said the persecution of Falun Gong in China is horrible.

Melinda Sullivan took her children to watch the parade. When the Falun Gong procession passed by, she applauded the practitioners. She said, “This procession is so beautiful. It’s a pleasure to see different cultures. The music they play is amazing.”

Melinda said she had heard of Falun Gong before, “I know Falun Gong, they are a great group. I support Falun Gong. I heard that the CCP is persecuting Falun Gong. The persecution is absolutely wrong. Falun Gong is a peaceful group. They often participate in community activities.”

Ms. Huang, who comes from Hong Kong, watched the Falun Gong procession with a happy smile. She said, “Falun Gong is great. I know Falun Gong, and I like the music they play. When I was in Hong Kong, I often read Falun Gong information the practitioners gave me.”

She said, “In the beginning, I didn’t believe what they said. Then I read more and more and noted that Falun Gong was seriously persecuted. The CCP is also persecuting Hong Kong people now, so I have personal experience. I support Falun Gong. Falun Gong practitioners have been suppressed by the CCP for so long. They are still persevering, and they are getting bigger and bigger, so I think Falun Gong is great. And you speak very well on social media. Many people support you.”

Josh and his wife Cindy liked the Falun Gong procession. Cindy said the team was so beautiful. Josh agreed with his wife. He said, “The music they played is beautiful, and the clothes are colorful. Falun Gong’s principles of Truthfulness-Compassion-Forbearance are wonderful.”

“You are the best, I stand with Falun Gong,” said Kevin, while giving a thumb up to the practitioners as they passed by. “I like the principles of Truthfulness-Compassion-Forbearance.”

Tania watched the parade from the road side. When she saw the Falun Gong procession, she was happy, and she imitated the hand gestures of the practitioners who demonstrated the exercises. A practitioner then stepped forward to teach her. After learning, she said that the exercises were very good. She said she felt a strong energy, which not only penetrated her body, but also reached her soul. She was excited and said it was a special day for her to see and learn Falun Gong.

Marina followed along with the exercise demonstration in the parade. She said she felt the energy flowing in her body when she was doing the exercises. She said several times in a row, “This exercise is very good. I love Falun Gong.”