(Minghui.org) Falun Dafa practitioners participated in the Hurstbridge Wattle Festival held on August 28, 2022. Located in the Yarra Valley, Hurstbridge is a popular tourist destination and the most famous and oldest wine-producing region.

Practitioners set up a booth, distributed information about Falun Dafa and demonstrated the exercises. Many people were attracted to the peaceful and melodious exercise music and stopped to chat with practitioners. They were interested in learning about Falun Dafa and practitioners’ efforts to call for an end to the persecution in China. Some said they felt very strong energy when they passed by the booth. They believe that those who have faith in Truthfulness-Compassion-Forbearance are good people and benefit society. 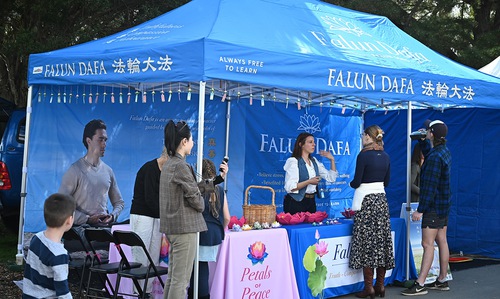 Local resident Jim, along with his wife and children, were very happy when they saw the Falun Dafa booth. Jim said that he’s known about Falun Dafa for a long time, “I saw a lot of banknotes that have information about Falun Dafa written on them when I was in China. It is a way that practitioners in China use to clarify the truth. They printed on banknotes ‘Falun Dafa is good,’ ‘Truthfulness-Compassion-Forbearance is good,’ and other phrases.

“The Chinese government does not allow people to believe in Falun Dafa. I think there is nothing wrong with believing in Truthfulness-Compassion-Forbearance. Whoever benefits society is a good person,” he added.

Jim’s wife, who is originally from China, said she believes that practitioners are peaceful and that practicing Falun Dafa benefits people. She said, “The Chinese government prohibits practicing Falun Dafa. I got information and learned the true situation after I went abroad. Only then did I realise that the [negative] reports in China have misled many Chinese people.”

Loyd Churches, another local resident, stopped by the booth and wanted to learn more about Falun Dafa. “I heard that in China, the government has some restrictions, so people can’t openly practice Falun Dafa there,” he said.

Practitioners explained to him the whole story about the CCP’s (Chinese Communist Party) persecution of Falun Dafa and told him that practitioners behave in accordance with the principles of Truthfulness-Compassion-Forbearance. He expressed his agreement with such universal values.

“Our world really needs these principles; they are good for society,” he said.

“The Falun Dafa Booth is Like an Unexpected Diamond”

A woman named Laura lingered at the Falun Dafa booth with her two daughters. Her youngest daughter was particularly interested in learning how to make the small paper lotus flowers.

Laura said that she recently traveled to Sydney, and, “I saw a Falun Dafa booth at an event in Sydney. The colors of the booth were blue and yellow. Practitioners were meditating next to the booth.”

She said, “I think practitioners are very peaceful. I can feel their energy when I pass by.”

Lisa said, “I understand that Falun Dafa is a kind of faith. When I came to the booth, I felt that they carry a very peaceful power. I felt that they have close ties with the community and care about the people around them.”

Mr. Nguyen, a photography enthusiast, said, “There are a lot of people at the festival and the activities are interesting. The atmosphere is lively and cheerful, but I felt pretty tired after walking around. When I came to the Falun Dafa booth, I found it to be very peaceful and benevolent—my soul felt relaxed.”

A young father came to the festival with his little daughter. He said, “Compared to the whole lively festival, the Falun Dafa booth is like an unexpected diamond. It is really amazing to stop here and learn about Falun Dafa and practitioners’ mission.”

Sophia, a Western practitioner, said, “Today’s event was truly unforgettable. People felt the beauty, peace and tranquility at the Falun Dafa booth that was not found elsewhere. They understood the beauty and preciousness of Falun Dafa. In one word, our booth was very popular. Many times, during my conversations with people who are interested in meditation, they mentioned that they hoped to learn more about cultivation methods that can elevate their spiritual realm, and hoped to find the ultimate answer to life: the real purpose and meaning of life.

“A young couple in their twenties said that when they passed our booth, they felt a strong desire to learn more. So they talked to me for five minutes. The woman almost cried at the end. I felt that learning about Falun Dafa benefited her both physically and mentally, and her face looked radiant. She said she had a feeling of coming home—a sense of spirituality in the air.”

Sophia added, “Almost everyone asked me where they could find the nearest practice site after they learned the facts about Falun Dafa.”

Another Western practitioner, Flynn said, “I have benefited both physically and mentally by practicing Falun Dafa, and I hope people in Melbourne can also know the beauty of Truthfulness-Compassion-Forbearance. Because of the ongoing brutal persecution, I want to call on people to support persecuted practitioners in China.”