(Minghui.org) Two rallies and a march were held outside the Irish Parliament and in the centre of Dublin on July 14 and 16, 2022 to protest the Chinese Communist Party’s (CCP’s) 23-year-long persecution of Falun Dafa in China.

Sixteen Irish state parliamentarians and local elected officials either signed a joint statement calling for an end to the persecution of Falun Dafa, or sent letters and signed a petition on the spot. They voiced their support for practitioners’ efforts to expose the persecution.

Deputy Mattie McGrath spoke at the Falun Gong Rally last year and once again joined the rally this year to express his support. He said, “The persecution of Falun Gong that is happening in China is terrible. I support you all (in protesting the persecution).”

Senator Sharon Keogan said that in the Western world people take basic freedoms for granted. She was startled to learn that for a Falun Gong practitioner even holding up a banner or handing out a leaflet takes deep faith and courage – not everyone can do it. The senator said that due to the persecution, it is far too dangerous for a Falun Gong practitioner to go back to China as one may never see or hear from them again. Senator Keogan said that she is willing to use her official capacity to help practitioners bring the tyranny to an end.

Multiple Irish elected officials co-signed the Joint Statement Calling for an End to the Persecution of Falun Gong, urging the Chinese government to respect international norms and the United Nations International Covenant on Civil and Political Rights, which China is a signatory to; to immediately stop the persecution of Falun Gong in China; and to unconditionally release all detained Falun Gong practitioners and other prisoners of conscience.

The joint statement stated, “In 2019, an Independent Tribunal in the UK, chaired by Sir Geoffrey Nice QC, concluded that ‘forced organ harvesting has been committed for years throughout China on a significant scale and that Falun Gong practitioners have been one—and probably the main—source of organ supply.’”

Falun Gong practitioners in Ireland held a rally and march in the center of Dublin, the capital, on July 16. They condemned the CCP’s 23-year-long persecution of Falun Gong, and called for the disintegration of the CCP and an end to the persecution.

The march passed through Chinatown and the famous O’Connell Street in the centre of Dublin, attracting many passers-by including Chinese people to take photos and videos. Numerous Chinese quit their memberships in the CCP and its affiliated organisations during the march.

After the march, practitioners held a rally in front of the famous Irish landmark General Post Office. Practitioner Zhao Ming told the public about the true nature of the CCP based on his personal experience of being persecuted in labor camps.

“Almost everyone asked me, ‘Why does the Chinese government persecute Falun Gong?” he said. “If we look back at the CCP’s history, Falun Gong practitioners are not the only group that the CCP persecuted. Since the Party seized power in 1949, the persecution of different classes and groups has come one after another.

“The CCP’s persecution campaigns were against landlords, business owners, and intellectuals, etc. The Communist Party is not a normal human political party, but an anti-human hooligan group, which fundamentally hates humanity and the universal values of human beings. If If we dig out Marx’s original writings, we will see descriptions like, ‘destroying traditional human society,’ and so on.”

During the event, many people expressed their support for Falun Dafa. Some people said they shared their videos of practitioners’ march they recorded on their social media. 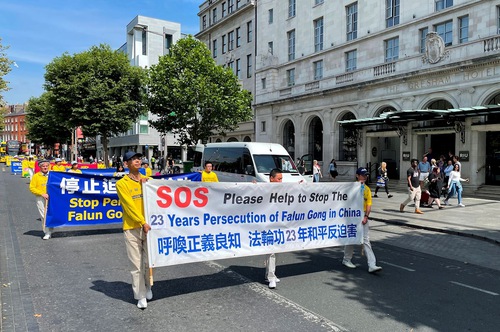