(Minghui.org) The 2022 Mid-U.S. Falun Dafa Experience-Sharing Conference took place in Chicago on August 14, 2022. Eighteen practitioners appeared onstage and talked about how they aligned themselves with the principles of Truthfulness-Compassion-Forbearance in their daily lives.

As the first in-person major conference since the COVID outbreak in 2020, the event was well attended. This year also marks the 30th anniversary of Falun Dafa’s introduction to the public in 1992. The participants said they cherished the opportunity and expected the conference would help them do better on their remaining cultivation paths. 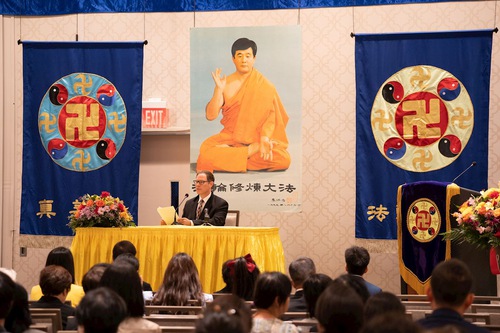 Many young practitioners attended the meeting. By following the teachings of Falun Dafa, they can maintain pure minds and high moral character.

One example is Will, who studies at a college in Illinois. He began to practice in 2011 with his parents. Since this is the second year of his internship at a news media founded by practitioners, he hoped to contribute more using the skills he learned in school. But he did not notice he had attachments of zealotry and showing off.

While helping report on the practitioners’ march in Washington D.C. last month, there were some last-minute changes that were made which made Will upset, thinking he was somehow ignored. “But when practitioners holding banners walked by me, I was overwhelmed by a strong energy, and all the attachments such as showing off disappeared,” he recalled. “I realised it is an honor to participate in Dafa projects arranged by Master Li (founder of Falun Dafa). That means I should cherish the opportunity and handle everything well. To achieve that, I need a calm mind with no pursuit of fame or personal interest.”

Alice from Kansas reviewed her progress both as a student and at work. When studying in college, she treated others well according to the principles of Truthfulness-Compassion-Forbearance. Despite the heavy course assignments and internship workload, she tried to look within and let go of attachments, including selfishness. She worked hard and received good grades in school. She said, “It is critical to stay focused on cultivation, constantly improve ourselves, and fulfill our mission.”

Flora came to the U.S. from China at age 19 and currently studies at a college in Iowa. She does her best to seize every opportunity to tell classmates and teachers about Falun Dafa through speeches, writing, and courses such as religion. In the literature class, she had a research paper writing assignment on career surveys. While drafting the article she wrote that the mainstream media in the U.S. was heavily influenced by communism. They are no longer impartial or independent. Her professor who had a leftist ideology did not agree, and warned her that the paper was going off-topic. Instead of giving up, Flora patiently and compassionately talked with the professor while maintaining her opinion. Once he understood, the professor not only approved the outline and provided help, but also considered using her paper as an example for future students. 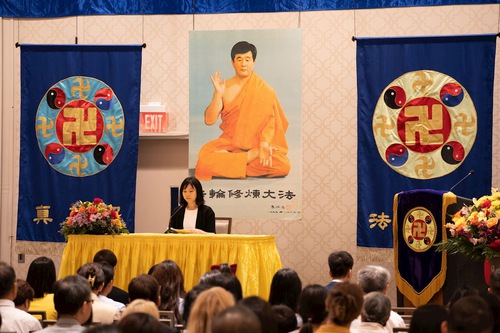 The Importance of Looking Within

Several practitioners talked about telling people about Falun Dafa and clarifying the truth. Angela from Illinois talked about why she decided to resign from an everyday job and become a full-time employee at a news media. There were numerous challenges in identifying news related to truth-clarification, contacting interviewees, as well as writing skills and efficiency. In addition, lots of efforts were required from writing the news content to producing videos that are appealing to everyday people, so that they can learn about Falun Dafa. After working very hard, she found that miracles would come as long as she had righteous thoughts. “When it became difficult to find interviewees, I put aside my feelings and ignored what people might think of me. I just focused on the task, then the interviewees would show up,” she explained.

But something came up. Her mother, in her 70s, suddenly visited her in Michigan. Due to language and cultural differences, she needed help. To make things worse, she also hurt her feet. When she looked inward Ms. Xie realised this was not accidental. It was related to her conflicts with family members that lasted for years and showed her where she needed to improve. She asked a friend to help take care of her mother. Ms. Xie also looked inward and sent righteous thoughts to eliminate any interference. In the end, she was able to do well while meeting with government officials in Washington D.C. and her mother’s condition also improved. The experience has helped her to now do better in cultivation.

Ms. He from Illinois participated in a news media project. After providing suggestions on how to improve things, the situation did not change and she was upset. When she talked with another practitioner, she realized the importance of letting go of oneself and complementing the efforts of others.

Another time due to some misunderstandings, a customer criticised her over the phone for over 20 minutes. Ms. He could not do anything but listen helplessly since she could not hang up the phone. In the beginning she felt the situation was unfair. But she later tried to understand the situation from the customer’s angle. She also followed up with the customer through another phone call and apologised.

From then on she became more considerate of others. When encountering customers with strong opinions she tried her best to talk from another angle. “The customers felt they were respected and listened to, and the problems were often resolved. Through this process I found my tolerance and compassion also increased,” Ms. He said.