(Minghui.org) Falun Dafa practitioners participated in the Magnolia Summerfest in Seattle on Saturday, August 6, 2022, at the invitation of the event organiser. The waist drum team and the group’s wonderful message of Truthfulness-Compassion-Forbearance had a positive influence on the thousands of spectators along the route.

The Magnolia Summerfest was held over three days and included parades, exhibition stalls, live music performances, and outdoor movies. Magnolia is an affluent neighborhood in Seattle with views out over Puget Sound and the Olympic Mountain Range in the distance.

The parade started at 10:30 am. The Falun Dafa group was led by practitioners holding banners that said, “Falun Dafa” and “Truthfulness,” “Compassion,” and “Forbearance.” Young practitioners holding lotus flowers came next, followed by the waist drum team made up of dozens of practitioners. In bright yellow outfits, they played songs such as “Falun Dafa Is Good,” and “Celebration.” At the end of each song, the spectators clapped and cheered. 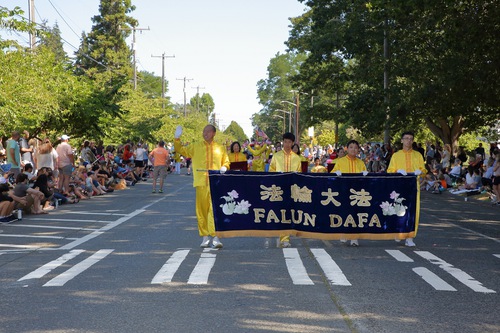 When the group passed by the podium, the emcee introduced them by saying, “Falun Gong, also known as Falun Dafa, is a form of spiritual practice that can improve one’s physical and mental health. The Falun Gong exercise consists of both slow movements and meditation. The practice guides people to improve in their moral character based on the tenets of Truthfulness, Compassion, and Forbearance. Originating in China, this practice is currently being practiced by millions of people in more than 100 countries and regions. What everyone is seeing today is the Chinese waist drum performance by the Falun Gong practitioners. The waist drum has a history of 2500 years and Chinese people play the waist drum to celebrate good harvest and also the Chinese New Year. Although Falun Gong has been persecuted by the Chinese Communist Party for 23 years, the Falun Gong practitioners in China are still courageously persisting in their cultivation. Here, we celebrate their enormous courage. Falun Dafa is free for everyone. If you would like to find more information about Falun Dafa, please visit falundafa.org.”

A Chinese lady who was watching the parade with her family was very enthusiastic about Falun Dafa. She raised her hands above her head to cheer for the Falun Dafa group. The man she was with held up a Falun Dafa flyer in one hand and waved to the group with his other. Their expressions showed that they were really cheering for Falun Gong and were proud of the practice. Practitioners nodded to them in acknowledgment as they paraded past. The man nodded in return.

Many of the spectators put their palms together to acknowledge the Falun Dafa practitioners. One lady started clapping her hands above her head for the group. When the Falun Dafa group stopped in front of her for some time, she clapped non-stop.

When another lady said how much she liked the Falun Dafa performance, a practitioner told her about Dafa’s miraculous healing effects and that it is being persecuted by the CCP in China. The lady expressed her gratitude for the information. Near the end of the parade route, a lady watched the procession with smiling eyes and put her palms together and bowed to the practitioners, who waved to her in acknowledgment.

After the parade ended, the Falun Dafa practitioners received many compliments and acknowledgments. Several spectators gave them the thumbs up, one young lady pointed to a practitioner in a yellow outfit and said, “That is Falun Gong!” and another lady stopped a practitioner to say that she was really thankful that the waist drum team could participate in her district’s parade. She had seen a parade with Falun Dafa practitioners a few years before and they had made a deep impression on her.

The parade organiser, Andy, said to the Falun Dafa representative, “Really, thank you for coming! Your group is very active in the district. I understand that Falun Gong is a belief and cultivation practice in the Chinese traditional culture. You are being persecuted in China and it is really hard to believe that the organs of these cultivators are being harvested while they are still alive. I am very happy that you appear in public and let people know about you all.”