Skip to content
Aug. 9, 2022 | By a Falun Dafa practitioner in Seattle

(Minghui.org) After a two-year hiatus due to the pandemic, Seattle’s Seafair returned this year. This is the 16th year that Falun Dafa practitioners have participated in the Seafair Torchlight Parade, which was held on July 30, 2022.

One of the largest summer celebrations in the northwest U.S., the Torchlight Parade, boasted more than 100 groups. Practitioners’ float, the “Fa Boat,” as well as their resounding waist drum performances and exercise demonstrations, received warm applause and cheers from thousands of spectators along the parade route. 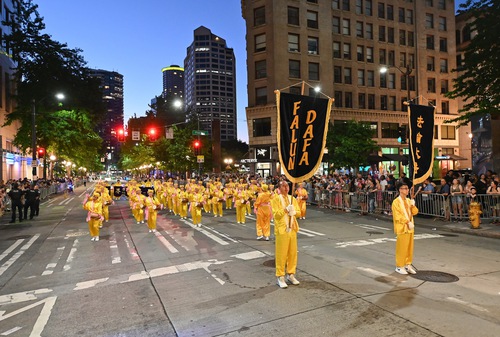 The sixteen-meter-long “Fa Boat” was handmade in the style of Ming Dynasty boats. Falun Dafa’s principles, Truthfulness-Compassion-Forbearance, were written on the sides of the float. The sails stood seven meters tall. The cherry blossoms painted on the boat symbolised the practitioners’ strong faith and unyielding spirit in face of the Chinese Communist Party’s (CCP) persecution. Having gone through several revisions, the float has won close to 20 awards in North America. Seafair organisers called the “Fa Boat” the pride of Seattle Seafair. 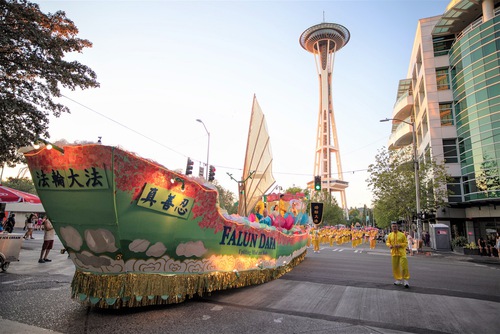 The host of KIRO-TV 7 introduced their entry during the live broadcast: “Based on Truth, Compassion, and Tolerance, Falun Dafa meditation has been taught to communities since 1992. It is practiced by over 100 million people in 100 countries throughout the world.” The host said that the colors of the practitioners’ entry were warm and vibrant. “They illuminate the Torchlight sky, sweeping you off into a divine land!”

Dozens of waist-drum dancers followed the float. With their resonant drum beats, the practitioners’ waist-drum team was warmly applauded.

Jimmy, an architect, said that he appreciated the culture and principles that practitioners brought to the parade. He said that the Chinese government persecuted Falun Dafa out of fear of losing power and control. “A government should protect people’s interests instead of depriving them of their right to pursue happiness or ideas,” he said. He encouraged the practitioners and said, “The righteous will conquer the evil in the end!”

One young man said, “They (Falun Dafa practitioners in the parade) are nice people. It’s so wrong for the Chinese Communist Party to persecute such nice people! I support you!”

A woman told a practitioner, “I see you every year. I finally learned about Falun Dafa’s health benefits. I’ll learn it online. The Chinese government’s persecution is terrible. We need people to care for each other. Falun Dafa is great. We need it!”

Another woman said, “This float is gorgeous! It uplifted my spirit as it passed by.”

Falun Dafa (also known as Falun Gong) was first introduced to the public by Mr. Li Hongzhi in Changchun, China, in 1992. The spiritual discipline is now practiced in over 100 countries and regions worldwide. Millions of people who have embraced the teachings, which are based on the principles of Truthfulness, Compassion, and Forbearance, and have learned the five exercises, have experienced improved health and well-being.