(Minghui.org) Falun Dafa practitioners held activities in Yokohama, the central city of the Kanagawa Prefecture on May 8, 2022, to wish Master Li Hongzhi a happy birthday, and celebrate the 30th anniversary of Falun Dafa’s public introduction and the 23rd World Falun Dafa Day. Practitioners brought the goodness of Falun Dafa to local residents by having a parade, rally, group exercises, teaching the exercises, and clarifying the truth.

The events were held in the square in front of the Sakuragicho Station in Yokohama’s city centre. Many members of Japan’s parliament, who have been supportive of Falun Dafa for many years, came to the rally and gave speeches.

The parade consisted of three sections: the Tian Guo Marching Band, the exercise demonstration group, and the Waist Drum Team. The parade started off from the square in front of the station and passed by many bustling streets and areas such as the famous tourist attraction, Yamashita Coastal Park, and the Red Brick Warehouse. The two-hour-long parade attracted many passers-by and tourists to stop and watch.

Many local residents agreed with the principles of Truthfulness, Compassion, and Forbearance and voiced their support for practitioners. They feel that Falun Dafa promotes peace and practitioners are sincere with a kind attitude. Some people said the world needs more people like this. 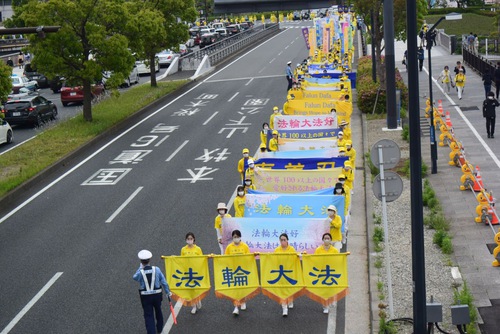 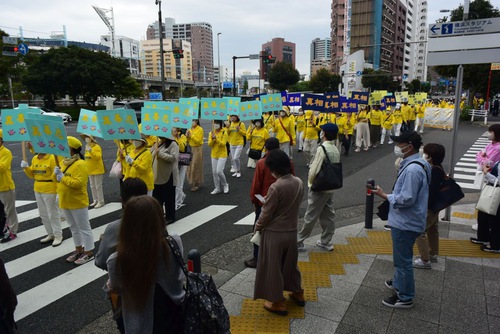 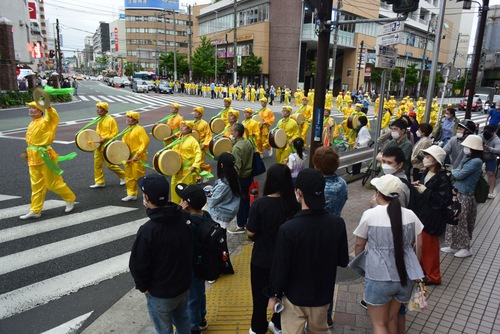 The former member of the House of Representatives, Mr. Hirosato Nakatugawa expressed his congratulations on World Falun Dafa Day. He said that he is very happy to participate in the event and that he shares similar goals with practitioners and he wished to join them in the parade.

Zushi City’s member of the House of Representatives, Mr. Hiroaki Maruyama is the representative of the SMG Network. He expressed his congratulations on World Falun Dafa Day in the speech he gave during the rally and said that he will continue to support Falun Dafa and encourage practitioners.

Yamato City’s member of the House of Representatives, Mr. Nakamura is the SMG Network’s agreed co-senator. At the rally, he sent his congratulations on World Falun Dafa Day and said that he will do all he can to end the persecution of Falun Dafa as soon as possible. He also sent his encouragement to practitioners.

During the rally the speech from Nakano City’s member of the House of Representatives, Mr. Koichiro Yoshida, was delivered by a representative. Mr. Yoshida is also a co-senator of the SMG Network.

In July 2006, Mr. Yoshida held the first exhibition in Japan which showcased how the Chinese Communist Party (CCP) violates human rights in China by harvesting Falun Dafa practitioners’ organs while they are still alive.

Mr. Yoshida expressed his congratulations for World Falun Dafa Day and said that he will definitely not tolerate the persecution of Falun Dafa by the CCP. He will also definitely not tolerate the CCP’s organised move to harvest organs and kill people, which he said is an evil human rights violation that has never happened in mankind’s history before.

Mr. Inagaki, president of the Japanese Falun Dafa Association addressed the rally and said, “In China, practitioners are kidnapped just because they practice Falun Dafa and their organs are forcefully plundered for sale simply because they do not want to give up their cultivation. This kind of despicable persecution has been going on for the past 23 years. Those who associate with the CCP are not going to have a bright future. Over these 23 years, we have survived the persecution. Now, more and more people in the world know about us and I believe that one day this persecution will end.”

Falun Dafa practitioner, Fu Weitong told the rally, “At this moment in time, we stand here with our hearts linked to the hearts of other Falun Dafa practitioners around the world. As World Falun Dafa Day is upon us, we also do not forget to render our aid to our fellow practitioners in China who share the same faith as us but are being repressed. We must persuade the world’s people, who are being deceived by lies, to stay away from the evil, to call for more kind-hearted people to step forward and object to China’s greatest persecution of human rights which has been going on for the past 23 years. Over these 30 years, Dafa’s moral principles of Truthfulness, Compassion, and Forbearance have spread all around the world, garnering more and more people’s favor and support. Falun Dafa’s brilliance will stay between the Heavens and Earth forever and ever.”

The exercise demonstration group demonstrated the exercises at the square in front of the Sakuragicho Station and the young Dafa practitioners from the Minghui School sent their birthday greetings to Master.

Ms. Tran Thi Anh, who is Vietnamese, participated for the first time in a the parade. She said, “I started learning Falun Dafa when I came to Japan in 2019 and my character and life changed a lot after that. In the past, I would get tired easily but I am always full of energy now.”

Mr. Odagiri stood in front of the Sakuragicho Station and watched the exercise demonstration. He talked with practitioners about the CCP’s persecution of Falun Dafa and said, “I live in Japan, and I find this very shocking. I hope that this world can correct these bad things so they will never happen again.”

Mr. Sato was touring Yokohama and listened as a practitioner explained about the persecution. He said, “I will go online to check it out. I hope that you all do not yield to the CCP. Please continue to expose the persecution.”

Mr. Shimizu said, “This kind of evil act must be stopped.”

Mr. Kanano, who cycled to Yokohama from Kawasaki read the materials and said, “As a Japanese, I am really shocked that this kind of persecution is still going on today. The persecution violates morals and virtues. I now know that China is violating the human rights of practitioners.” He signed the petition to show his support.

Mr. Hikita, who brought his dog out for a walk, said, “I know about Falun Dafa. I also know the (CCP’s) live organ harvesting. The CCP is really hopeless. We should let more people know about this. I object to Communism and I also object to the persecution.”

Mr. Ike spoke to a practitioner. After learning the truth about the persecution, he said, “I know about the live organ harvesting. However, it is really unbelievable. It is really hard to comprehend that the CCP is removing organs from Falun Dafa practitioners while they are still alive. This is too much.” He also signed the petition to show his support for Falun Dafa.

Mr. Omori, who came to Yokohama for a walk, said, “I know about Falun Dafa. I often watch social media.” He also said, “You guys keep it up.”

Millions of people who have embraced the teachings, which are based on the principles of Truthfulness, Compassion, and Forbearance, and learned the five gentle exercises have experienced uplifted health and well-being.