(Minghui.org) The San Francisco Ferry Building, located at the busy junction of Embarcadero and Market Streets, is the terminal for ferries traveling across San Francisco Bay. It is also a popular tourist landmark and shopping centre. A large farmers’ market is held next to the Ferry Building every Saturday, attracting large crowds.

On the first Saturday of each month, Falun Dafa practitioners demonstrate the Dafa exercises near the Ferry Building and raise awareness of the ongoing persecution in China. Many people stop to watch and some express an interest in learning the exercises. Many sign the petition to help end the persecution after learning how the CCP (Chinese Communist Party) persecutes those in China who practice Falun Dafa.

On Saturday, February 5, 2022, the fifth day of the Chinese New Year, Dafa practitioners came to the Ferry Building once again. Accompanied by the soothing exercise music, they demonstrated the Falun Dafa exercises.

Mr. James Richard, who stopped to watch the practitioners as they did the exercises, was interested in learning more about Falun Dafa. He asked many questions, including why Falun Dafa is suppressed in China.

A practitioner explained, “Falun Dafa was first taught publicly in China in 1992 and soon became popular due to its significant health benefits. According to government statistics, one hundred million people in China practiced Falun Dafa. Later on, the CCP leader at that time, Jiang Zemin, launched a persecution campaign because he was jealous of its popularity, and the suppression continues today.” James expressed concern for the plight of practitioners in China and said he wanted to learn Falun Dafa.

When a man in a wheelchair learned about the persecution in China he immediately signed the petition. He said, “I support you!” He was thrilled to receive a handmade paper lotus flower with the words “Falun Dafa is good, Truthfulness, Compassion, Forbearance is good.” He said he felt very fortunate to meet practitioners, “I will learn Falun Dafa after my surgery,” he added.

Anna saw practitioners doing the exercises when she shopped at the farmers’ market. She told practitioners she’d heard about Falun Dafa when she was in Chinatown. She said she supports Falun Dafa and signed the petition to end the CCP’s brutalities. 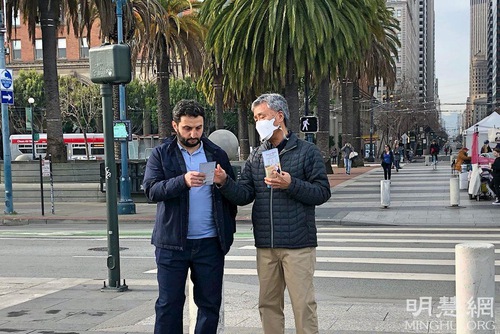 Background: What Is Falun Dafa and Why Does the CCP Persecute It?