As the pandemic restrictions have eased and New York has been reopening, Falun Dafa practitioners are participating in numerous events to introduce the practice in local communities.

In addition to demonstrating the exercises, practitioners also play the waist drums at these activities. Impressed by the peaceful energy, many spectators have applauded and taken photos and video recordings.

People have also accepted flyers and signed a petition calling for an end to the ongoing persecution in China. Some asked where they could learn the exercises.

Immigrants from over 120 countries who speak more than 130 different languages live in Queens, which is known for its diverse culture. Many people in Jackson Heights speak Spanish, including those in a community from Ecuador.

The parade kicked off at Northern Boulevard and extended from 69th Street to 86th Street with dozens of participating groups, including the Ecuadorian Civic Committee of New York. South America is well known for beauty pageants, and many participants joined the parade.

As soon as Sandra Arias saw the waist drummers performing at the corner of Northern Boulevard and 74th Street, she began to applaud—even after the group had passed. “Bravo!” she exclaimed. “Thank you for coming!” 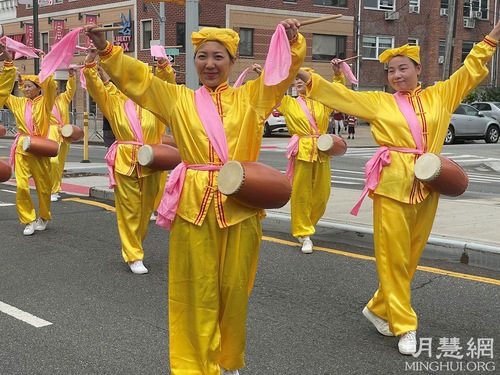 Practitioners demonstrated the exercises, and the waist drum team performed during the Halfway to St. Patrick’s Day Parade on September 12 in Farmingdale Village on Long Island.

Located in Nassau County, the most densely populated and second-most populous county in New York, historic Farmingdale Village is southeast of Midtown Manhattan. The parade traveled along Main Street and ended at the Village Green.

Practitioners wore green scarves to celebrate St. Patrick’s Day. People on either side of the parade route greeted the practitioners’ entry with waves and rounds of applause.

The waist drum team also participated in the Latin American parade in Brooklyn.

Juan Powres, organiser of the event in Brooklyn, said that September 15 is “Independence Day” (from Spain) for many Latin American countries such as Mexico, Costa Rica, Nicaragua, El Salvador, Honduras, and Guatemala. Hispanic communities hold celebrations and parades every year.

He was happy to see the waist drummers perform and said their participation added to the community’s diverse culture. As the parade passed by, people said they liked the waist drums very much and some even danced in time to the drum beats.

Spectators were also impressed by the peaceful and gentle exercises. Ana Santana, the Guatemalan Parade Queen, thanked practitioners for the their contribution and dedication to the principles of Truthfulness-Compassion-Forbearance.

When one woman signed the petition calling for an end to the suppression in China, she said she was happy to help with the great cause.

Ms. Li, a contact person for the waist drum group, said that drum performances have a long history in China. Known for their rhythm and energy, the drums are also played during celebrations to express joy. She was delighted to share this ancient tradition and beauty with people from different ethnic and cultural backgrounds.