People visiting Aotea Square in downtown Auckland on June 4, 2016 saw an re-enactment of tortures commonly used by the Chinese communist regime on Falun Gong practitioners. The event raised the awareness of the 16-year-long inhuman and brutal persecution of Falun Gong in China. Many people signed a petition requesting an immediate end to the persecution, and forced organ harvesting from jailed Falun Gong practitioners.

The anti-torture exhibition contained two parts. The reenactment of the “locked in a small iron cage” and “hanging” tortures, and a demonstration of forced organ harvesting from living Falun Gong practitioners for sale to a transplantation hospital. 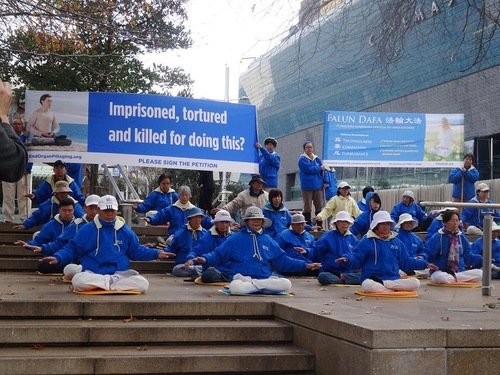 People in the downtown area this weekend were shocked to see that such barbaric atrocities were still happening in a modern and civilized society.

Some passersby took photos and videos, some talked to Falun Gong practitioners for more information, and many people signed a petition to help stop the persecution and forced organ harvesting crimes.

Well-known human rights lawyer Kerry Gore spoke at the event. He mentioned that Chinese Falun Gong practitioners were being persecuted by the regime in many ways, including illegal arrests, illegal detentions, physical tortures, brainwashing, mental and psychological tortures, and even being subjected to rape, slave labor, and organ harvesting.

Mr. Gore warned the communist regime that history has shown humankind that all regimes that persecute their people are eventually swallowed by their own crimes.

Ms. Hoira Peterson from Nelson signed the petition demanding a stop to the persecution, and commented that the persecution was evil. “I believe everyone has the right to peacefully practice the exercise. There is no reason to persecute them. It is evil to torture a group of peaceful people.”

Mr. Neville, an accountant from Auckland, said he heard about Falun Gong decades ago, and that he would pray for them from his heart.

Jimmy, who lives in west Auckland, said that he started practicing Falun Gong last Christmas, and was reading the English version of the book Zhuan Falun. He joined the exercise demonstration at the event.

Many Chinese visitors quit the Chinese Communist Party and its affiliated organizations after learning about the Party’s atrocities.