April 21, 2016 | On the eve of the 17th anniversary of the Peaceful Protest of April 25, Falun Gong practitioners from Macau held activities in front of St. Dominic’s Church, a popular tourist destination, on April 17.

They wanted to tell the local residents and tourists from mainland China what Falun Gong really is and what really happened in Bejing on April 25 in 1999. They also wanted to convince the Chinese to quit the Chinese Communist Party.

That afternoon, practitioners displayed banners that said: “Stop the persecution of Falun Gong,” “Falun Dafa is great,” “In memory of the peaceful protest of April 25,” and “Bring the murderers in the persecution to justice.” Many tourists stopped to look and and take pictures.

Several Party members, who said they were from Shanghai, seemed pleased to have a chance to announce they were quitting the Party. A practitioner told them, “You must remember something really important—do not get involved in the persecution of Falun Gong. Falun Gong is a peaceful group.”

One of the Shanghai tourists said, “Not only have I never gotten involved in the persecution, I’ve even tried to protect local practitioners.” He told practitioners that he was a government official and knew that the government has wronged Falun Gong. “The Party is so corrupt now,” he said. He took quite a few Falun Gong items for his grandchildren.

Several passersby said that they had seen Falun Gong events in many other cities around the world. “It is surprising and great to see you guys in Macau, too,” a Chinese said. 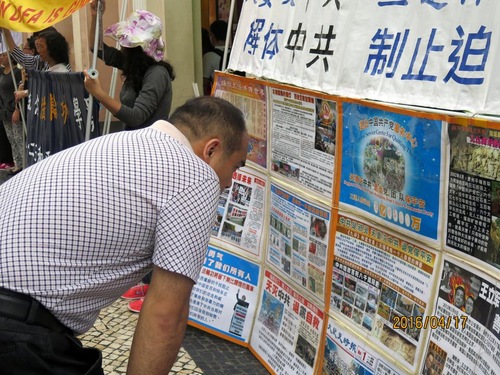 One lady was curious about what practitioners were trying to do, so she was asked if she was a member of the communist party or its affiliated organizations. When the lady said she had joined the Youth League, the practitioner asked her if she had ever heard about the movement to quit the Party. The lady never had.

The practitioner said, “The Party has been persecuting Falun Gong and many other innocent people for a very long time. They even harvest organs from living practitioners for profit. The Party has committed unpardonable crimes. It will be punished. When that day comes, its members will go down with it.

“We are trying to tell Party members to recognize that the Party is evil, to stand on the side of justice, and to abandon the Party to ensure a safe future for themselves.”

The lady nodded in agreement and quit the Youth League then and there.