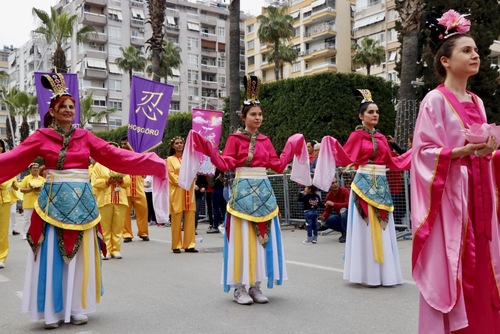 Falun Dafa practitioners participated in the International Orange Blossom Festival in the city of Adana, one of the largest cities in Turkey, on April 5-7, 2019.

Millions of people had the opportunity to experience Falun Dafa during the three-day festival, at the practitioners’ booth in the city centre, at various performances throughout the area, and in the Orange Blossom Festival parade—Turkey’s only annual parade.

The annual Orange Blossom Festival welcomes the arrival of spring, with the magical fragrance of blooming orange trees permeating the city. Millions of visitors from Turkey and abroad join in the celebration, taking part in the entertainment and carnival amid the fragrance of orange blossoms.

The parade on April 6 included thousands of participants along the 1-kilometre route. An estimated one million spectators enjoyed the diverse procession. The Falun Dafa group drew a great deal of public interest and was photographed by hundreds of people.

In the city centre, practitioners demonstrated the Falun Dafa exercises onstage, handed out beautiful handmade lotus flowers, and also took the opportunity to call attention to the ongoing, 20-year persecution of Falun Dafa in China.

They gathered signatures on a petition calling for Jiang Zemin, the former head of the Chinese government who started the brutal persecution, to be brought to justice.

Approximately 7,000 brochures were distributed, and the Dafa exercises were shown on the sidewalk and along the streets for three days.

Mekselina Yörür, who lives in Adana but is studying in Eskişehir, was eager to learn the Falun Dafa exercises. She learned all the exercises over the course of an hour. “I felt like I was drawn here,” she said. “There’s a different energy here. I want to take up this cultivation system and would like to take part in your exercises.”

Dönay, Ezgi and Narin, young people from Adana, immediately signed the petition when they heard about the persecution of Falun Dafa. Dönay asked, “Why is this persecution taking place? There is no reason for it.”

Sena, in the booth next to the practitioners, patiently learned the first four exercises. She said the exercises brought her a sense of peace and comfort. When she heard about the persecution, she signed the petition calling for its end.

Over the course of the festival, many people telephoned practitioners to inquire about Falun Dafa and ask how they could learn the exercises. Mr. Gokhan, a police officer who works in Adana, called a practitioner and said that he wanted to learn Falun Dafa. He added that he could help practitioners organize other activities in Adana.

While the practitioners were demonstrating the exercises, a reporter from the local Toros newspaper stopped by and interviewed the practitioners. The Toros ran a front-page story about Falun Dafa the next day, titled “Falun Dafa is a high-level practice, which has attracted great interest from the Adana public.”