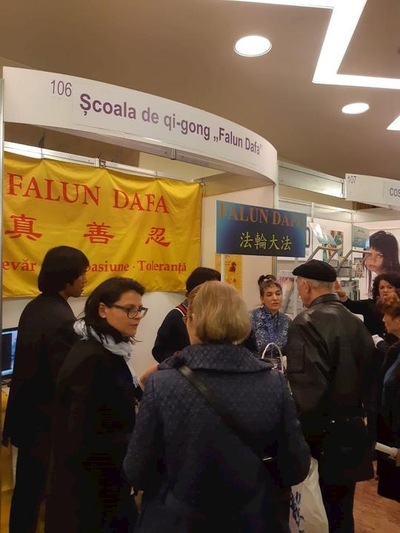 Falun Gong practitioners participated in a health expo held at the Palatuluti Exhibition Hall in Bucharest on February 8-10, 2019. The popular three-day event was well attended. Many people were drawn to the practitioners’ peaceful exercise demonstration and wished to learn more.

Practitioners were invited to demonstrate the exercises on stage every day at 4:00 p.m. They also had an information booth where they handed out paper lotus flowers and handmade calendars. They told people about Falun Gong and how the practice is being persecuted in China.

The practitioners’ exercise demonstration attracted the attention of many people who stopped to watch. Two Chinese businessmen said that they wanted to learn. A practitioner gave them the website and invited them to come to the local practice site. They thanked the practitioners. 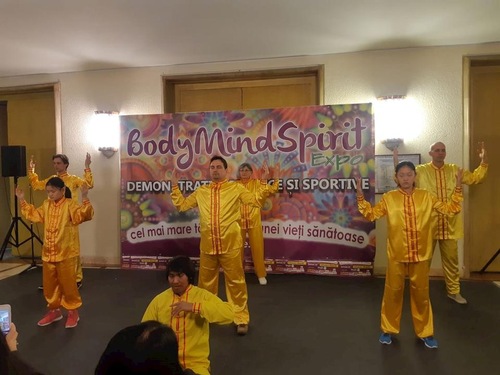 Some people said they felt surrounded by peace and tranquility while watching the practitioners demonstrate the exercises. One man said he felt a wave of strong energy. Several people wrote down the address of the practice site and said they would come to learn Falun Gong.

After watching the exercise demonstration one woman said she felt a strong energy field surrounding the practitioners while they practiced. She said that she would go to the practice site to learn Falun Gong.

A 24-year-old man said, “My father told me about Falun Gong. I’m very happy to see you here at the expo.” He said he always wanted to meet practitioners. After hearing they would be at the expo, he came to see them and express his support. He said that he was saddened to hear that the Chinese Communist Party persecutes Falun Gong in China.