Skip to content
Dec. 23, 2022 | By a Minghui correspondent in Stockholm

(Minghui.org) Practitioners held activities next to the Swedish Parliament building and a busy area next to the Stockholm Concert Hall on December 16 and 17, 2022. They told people about Falun Dafa and the ongoing persecution in China.

It is the Christmas season and despite the bitterly cold weather, the streets were filled with people shopping. Many stopped to watch practitioners as they did the exercises. Some talked with them to learn about the persecution in China, in particular, they asked about the state-sanctioned organ harvesting conducted by the Chinese Communist Party (CCP) and many signed the petition to help end the brutalities.

Mr. Chen is from China and is studying in Italy. He stopped and read the information, and then chatted with practitioners. He said, “I want to sign the petition with my English name to show my support for you!” He took a pen and signed the petition.

Practitioners explained the facts about the persecution and the significance of withdrawing from the CCP and its youth organisations. He said he was very young when the persecution began and did not pay much attention to these things. With practitioners’ help, he went to the Quit the CCP website using his mobile phone and quit his membership in the Young Pioneers and Youth League associations using an alias. He took a screenshot of the confirmation of his withdrawal and kept it as a record on his phone. He left looking delighted.

Another Chinese man who is 24 this year and pursuing postgraduate studies in Stockholm was amazed when he saw practitioners collecting signatures on a petition to end the persecution. He said, “The CCP is evil, I want to support you!” He told practitioners he took part in the protests against the Zero-COVID policy in China recently. He is terrified by the regime’s brutal suppression of those who dare to go against the Party.

After listening to practitioners’ explanations of what Falun Dafa is and the lies fabricated by the CCP to vilify the practice, he agreed to withdraw his Party membership. He also took a copy of the Nine Commentaries on the Chinese Communist Party after a practitioner explained that it would help him understand the true nature of the CCP and overcome his fear. 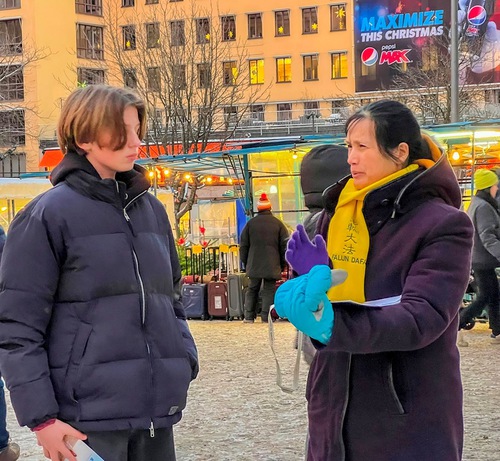 Chinese Learn the Facts about the Persecution

Two young men from China who live in Italy were on holiday in Sweden. They told practitioners, “We know the truth about the persecution of Falun Dafa.” They chatted with practitioners and learned more about the practice and accepted all the information practitioners offered, including the Nine Commentaries on the Chinese Communist Party. They said they planned to quit the CCP on the Epoch Times website.

Two young Chinese from Shanghai passed by the information booth and asked practitioners many questions about Falun Dafa. They explained all they knew about it was the anti-Falun Dafa propaganda they learned in China. They were touched after practitioners cleared up their doubts and said they realised Falun Dafa is good.

Before leaving, they said, “We Chinese have been deceived by the CCP for too long. Today, we finally learned the facts!” They said they supported practitioners in their peaceful protests against the suppression. 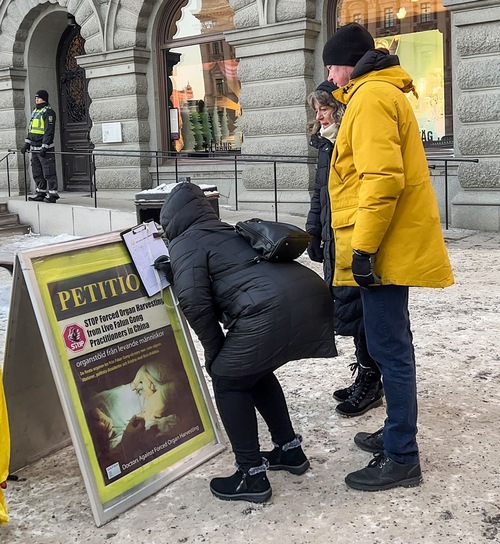 “This regime is inhuman, it dares to carry out organ harvesting, we cannot ignore this,” said two women from Norway after they learned how brutal the persecution of Falun Dafa is in China. They kept saying, “This must be stopped!” They signed the petition without hesitation and said they were interested in learning how to practice Falun Dafa. They took the flier practitioners offered them.

Three young men from Finland were shocked to read about the CCP’s organ harvesting. Their carefree expressions became serious as they listened to practitioners describe the persecution. All three walked to the table to sign the petition and shook hands with practitioners. One said, “Now we know the truth. You are exposing and stopping the atrocities through conducting such activities, you are doing an important thing. We wish you all the best!”