Skip to content
Sept. 2, 2022 | By Minghui correspondent He Ping

(Minghui.org) Practitioners held truth-clarification activities at Mynttorget Square in central Stockholm each Friday and Saturday afternoon in August 2022. The activity drew the attention of tourists from around the world. After learning about Falun Dafa and the persecution, many people thanked the practitioners for their unremitting efforts and dedication in spreading the truth. They also signed the petition calling for an end to the Chinese Communist Party’s (CCP) persecution.

August is the peak of the tourist season in Stockholm, and Mynttorget Square is always crowded. Many people were drawn by the soothing exercise music, and an endless stream of people stopped to watch the practitioners. Some said that this was the first time they heard about Falun Dafa, and many people chatted with practitioners. Some had previously heard from various channels about the CCP’s persecution of the practice, and went directly to sign the petition opposing the persecution.

One weekend afternoon in early August, when the event had just started, a Swedish man walked up, introduced himself, and said he was a journalist from Malmö. He said he wanted to make a program to introduce Falun Dafa. He asked the practitioners to explain what Falun Dafa is, on camera, and why the CCP persecutes it. He then took video footage of the practitioners practicing the exercises, passersby reading the display boards and signing the petition, and his wife talking with practitioners to learn about the spiritual practice.

He told practitioners, “Most Swedes are against the CCP’s dictatorship and stand with you. Facing the brutality of the CCP, your perseverance and peaceful and rational protest are admired. You are real heroes and warriors.” He praised them and gave them a thumbs up. 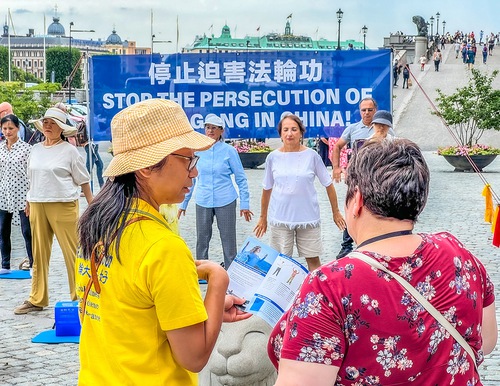 Truthfulness-Compassion-Forbearance is What I Seek

Henry from the United States was shocked when he saw the display board with information about the CCP’s organ harvesting from practitioners while they are alive. He talked to practitioners, and after learning the details asked eagerly, “How can I help you? I’m very sad to hear about this.”

After listening to the facts, he said he knew the CCP’s nature and he believed that justice would prevail.

He also said that he was touched to meet Falun Dafa practitioners in Sweden who stood up for justice. “I agree with Truthfulness-Compassion-Forbearance, and it’s exactly what I’m looking for. I especially like traditional Chinese culture, and I also learned Chinese in Taiwan. I will definitely spend time learning about Falun Dafa.” He expressed his admiration for practitioners for their unremitting efforts, dedication, and courage to protest the persecution.

A middle-aged couple from Germany listened to a practitioner’s truth-clarification on August 26. The woman’s English was limited. She looked at the display boards carefully and was indignant when she understood that the CCP was torturing practitioners in China and even harvesting their organs.

She was eager to know why. She hoped that her husband could translate for her in German. A practitioner who could speak German came and translated for her. She was happy when she heard the practitioner speaking German. 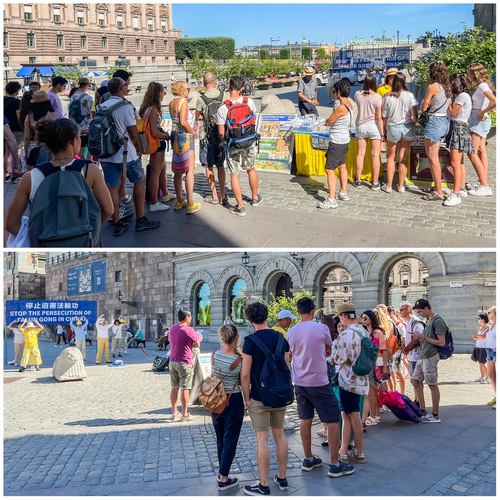 “Are all the propaganda and reports on TV and newspapers false?” asked a young Asian man on August 27. He had many doubts and confusion and wanted to talk to practitioners.

It turned out that he was born in Malaysia, and he heard about Falun Dafa when he was an undergraduate student in Singapore, but it was all lies from the CCP’s media. He later heard some facts, but still had a lot of questions. The practitioner told him the details—from the peaceful appeal on April 25, 1999, to the CCP-staged Tiananmen self-immolation incident. The practitioner also told him that he and his friends were persecuted by the CCP for not giving up their belief.

After learning about the persecution, he said he understood, but he thought signing the petition was useless. He didn’t sign, but he didn’t leave, and talked with another practitioner. The practitioner talked with him based on his own experience.

“Signing is voluntary, and this is an opportunity for everyone to choose justice and conscience,” the practitioner said. “Practitioners raise awareness to tell those who don’t know about the persecution and those who are misled by the CCP’s lies like you, as well as all the good people in the world, to recognise the nature of the CCP and to not be misled by its lies.

“The CCP has been trying its best to block news and cover up the persecution for a long time, in an attempt to fool the world with lies. Think about it, the CCP spread lies to slander Falun Dafa, it tortures practitioners, and even harvests their organs. If everyone keeps silent and does not come forward to expose these heinous crimes, how terrible will the world be? That is helping the tyrants.”

The young man nodded in agreement. Afterwards, he walked to the table, picked up the pen, and signed the petition. “Today I completely understand. I must sign the petition,” he said with a smile.