The event featured many activities and booths, including on the arts, food, crafts, ethnography, sports, mineralogy, astronomy, traditions and innovations, and archaeology.

Practitioners set up a booth and demonstrated the exercises. People were drawn by the peaceful exercise music, stopped to watch, and asked for more information. 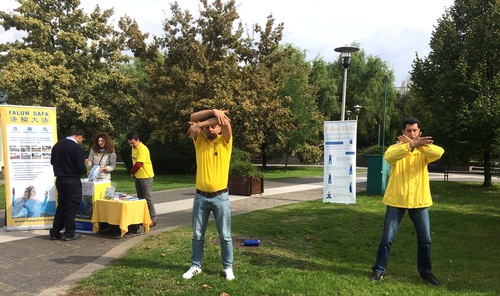 One woman said she came to the booth because she felt good energy coming from it. She said she’s been a spiritual seeker since 1996. She’d been given information about Falun Dafa and had bought copies of Falun Gong and Zhuan Falun. She spent some time talking with practitioners and asking many questions about Falun Dafa and the Chinese Communist Party’s (CCP) persecution.

When a practitioner was about to give a woman a flyer, the woman said she’d already gotten one the day before. She said she’d read it and wanted to know more. She also asked if there was a practice site in Baia Mare.

Many young people came in groups to learn about Falun Dafa. Some learned the exercises and said afterward that they felt really good. One of them said that he had back problems and thought that the practice was very good for his back.

Four children aged about seven stopped to watch the exercise demonstration and started to learn to do them. They did their best to hold each of the four positions of the second exercise. Their parents said they were impressed.

One woman took a leaflet and a lotus flower for her daughter, who was about five years old. They returned shortly after with the little girl holding the flower. Her mother said that she had to come back because her daughter was very insistent about finding out what the lotus flower represented, why it was offered for free, and what was its message.

A practitioner told to her that the lotus is the symbol of purity and explained in detail the principles of Truthfulness-Compassion-Forbearance written on the label. She listened with rapt attention, and her mother thanked the practitioner for the information.

As a mother and her six-year-old son walked around the Chestnut Festival, a practitioner handed the mother a leaflet. The little boy said, “Put it in a safe place because you might need it one day.”

Two police officers stopped about ten metres away and watched as practitioners demonstrated the exercises. A practitioner offered them a leaflet. One of them said he knew about Falun Dafa but did not understand why it was forbidden in China. The practitioner explained that the number of people who practiced Falun Dafa was greater than the number of CCP members. The head of the CCP was jealous and initiated the persecution.

A mother and daughter had a booth across from the practitioners’. The first day of the festival a practitioner told them about Falun Dafa and gave them a flyer and a lotus flower. The next day, the mother took a stack of Dafa fliers from a practitioner and began to help distribute them to passersby.

Jiang Zemin, former head of the CCP, perceived the spiritual discipline’s growing popularity as a threat to the CCP’s atheistic ideology and on July 20, 1999, he issued an order to eradicate the practice.

Romania: Introducing Falun Dafa at the “Health From Nature” Fair