Skip to content
Oct. 24, 2022 | By Minghui correspondents in Sydney

(Minghui.org) Practitioners participated in the Mind Body Spirit Festival held at the Sydney International Convention & Exhibition Centre from October 13 to 16. Many people started to learn the Falun Dafa exercises at the event.

The festival is Australia’s largest and most popular health, well-being, and naturopathic event, and 200 different groups exhibited. Practitioners demonstrated the five exercises, and many people stopped to find out about the meditative practice. Some even started to learn the exercises at the event. They said they could sense good energy and immediately felt calm and relaxed. Many signed up for free classes at group practice sites across Sydney.

Melanie stood for a long time in front of the Falun Dafa booth. She told a practitioner that she’d walked around the exhibition hall for hours, but nothing caught her attention until she walked by the Falun Dafa booth: She felt such strong energy that she didn’t want to leave. The practitioner told her that it was the energy of Falun Dafa. Melanie started to learn the exercises and planned to go to a local practice site to continue practicing 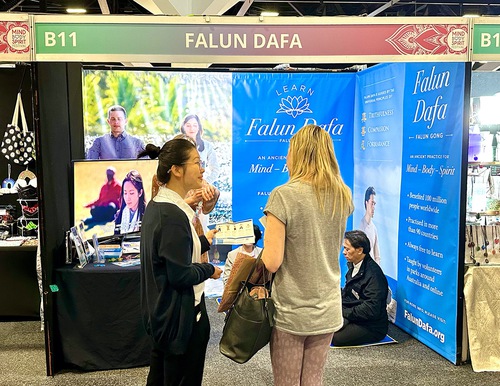 Taryn Hill was looking for a way to deal with anxiety. When she saw the Falun Dafa booth, she told a practitioner that she had run into practitioners before and they had told her about Falun Dafa and the Chinese Communist Party’s (CCP) persecution. She said she had told many people about the issue.

Taryn said she admired the principles of Truthfulness-Compassion-Forbearance: “After I read the flyer, I knew that this was true cultivation.” She learned the first exercise and said, “After practicing this, I feel relaxed.”

Susan said, “After doing the exercises, I feel concentrated. I enjoy the fluidity of the movements. It was a pleasant experience. I feel so good and calm now.”

Psychologist Wishes to Share the Spiritual Practice with Clients

Jodie Styles is a clinical psychologist who was helping out at a friend’s booth. She said she was interested when she saw practitioners demonstrating the exercises. On the last day of the event, she came to the Falun Dafa booth to learn more about the practice. She said she would share the information with her clients.

Vanessa Keane from Peru chose the Falun Dafa booth as her first stop at the festival because she wanted to know more about the practice. She said that someone had told her about Falun Dafa several years ago, and she had read the Dafa books. “I agree with everything said in the books. I’m still learning,” she said.

She also appealed to people to learn about the CCP’s ongoing persecution of Falun Dafa in China and help stop the brutality.

Jiang Zemin, former head of the CCP, perceived the spiritual discipline’s growing popularity as a threat to the CCP’s atheistic ideology and on July 20, 1999, he issued an order to eradicate the practice.