(Minghui.org) More than 1,500 practitioners from 35 countries held two marches in different parts of Warsaw on September 9 and 10. Impressed by the peaceful events and surprised by brutality of the Chinese Communist Party (CCP), including the forced organ harvesting, several Polish news media and websites reported on the activities. 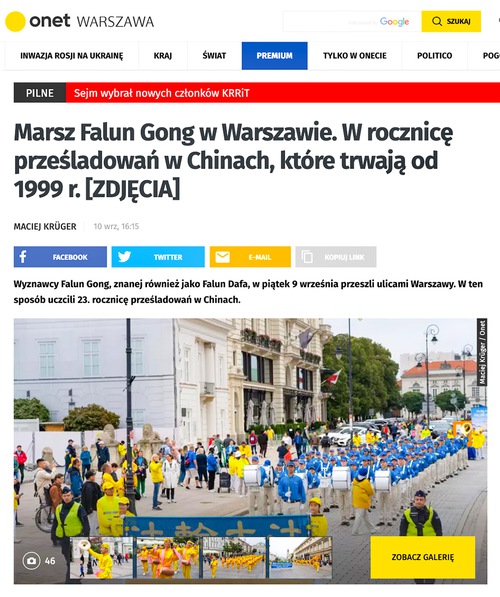 One of Poland’s Top Websites Reports on Parades

Onet.pl WARSAZWA, one of the top web portals in Poland, published 46 photos of Falun Gong practitioners’ marches in an article titled, “Falun Gong March in Warsaw. On the Anniversary of the Persecution in China, Which Has Been Going on Since 1999”.

“Followers of Falun Gong, also known as Falun Dafa, walked through the streets of Warsaw on Friday, September 9, commemorating the 23rd anniversary of persecution in China,” according to the article. Although the practice was well received by Chinese citizens, the CCP felt it was a threat. “Suppression against practitioners began in 1999, leaving many people dying tragically in prisons,” the article continued, “The brutal persecution has continued to this day, according to Falun Gong practitioners.” 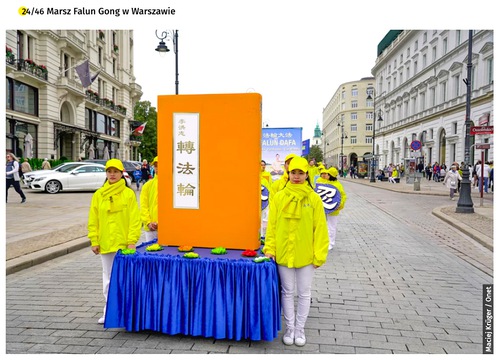 Principles of Truthfulness-Compassion-Forbearance Are Suppressed

Gazeta Wyborcza, one of major newspapers in Poland, reported on the practitioners’ march on September 10 in an article titled “1,500 Chinese Falun Gong members at a march in the Old Town: ‘We have been persecuted for 20 years.’” Launched in 1989, Gazeta Wyborcza is an independent Polish daily newspaper which covers political, international, and general news.

“Falun Gong has been suppressed by the CCP for over 20 years and the Chinese authorities have tried all means to eradicate the peaceful practice,” said a practitioner who coordinated the event. That is why practitioners from all over Europe have attended this event including Germany, France, United Kingdom, Italy, and others.”

“The event drew much attention from spectators. In addition to the exercise demo, practitioners in traditional Chinese costumes also played drums, performed a dragon dance, and held banners in several languages including Chinese, Polish, English, German, Italian, and Czech.”

The banners read, “’Truthfulness, Compassion, Forbearance,’ the key principles of Falun Gong. But such a peaceful meditation system has been suppressed by the CCP since July 1999. As a result, practitioners often went to the Chinese Embassy area and peacefully protest against the mistreatment.”

A practitioner explained, “There are also other practice sites in Warsaw such as one at the Szczęśliwicki Park. The practice improves mind and body, and teaches one to be a good person in daily life.”

“Some of the participants of the march are dressed in white (the color of Chinese mourning) and carry portraits of those died [in the persecution],” according to the Gazeta Wyborcza report. Some banners had messages such as, “Help stop the persecution of Falun Gong in China” or “Bring Jiang Zemin to justice.” Jiang was a former CCP head who started to suppress Falun Gong in 1999, wrote the report.

As explained on some of the banners, there are many victims of organ harvesting. “Beijing continues to collect organs from prisoners. Mostly from members of the banned Falun Gong practice,” the Gazeta Wyborcza reported.

“There were at least 70 million Falun Gong practitioners in China when the practice was suppressed in 1999. A large number of them were detained and tortured with some losing their lives in the organ harvesting. Despite the persecution, the practice has attracted people from all around the world.

“Because of the CCP’s brutality, thousands of practitioners have died in the persecution,” one Falun Gong practitioner said. “But due to censorship and information blockade, the real number could be much higher.”

Background: What Is Falun Gong and Why Is the CCP Persecuting It?

Falun Gong (also known as Falun Dafa) was first introduced to the public by Mr. Li Hongzhi in Changchun, China, in 1992. The spiritual discipline is now practiced in over 100 countries and regions worldwide.