Skip to content
Aug. 28, 2022 | By Minghui correspondents in Sydney

(Minghui.org) Falun Dafa practitioners held a truth-clarification activity in front of City Hall in Parramatta on August 20. Some city councilors attended and spoke in support. They thanked practitioners for their positive contributions to the local community, strongly condemned the Chinese Communist Party’s (CCP) persecution of Falun Dafa, and called for an end to the brutality.

Deputy Mayor: I Appreciate All You Do

Sameer Pandey, Deputy Mayor of Parramatta, said, “I am very happy to be with you today to celebrate the spread of Falun Dafa. I recognise and respect that you have passed down the precious traditional culture from ancient times to today and into the future.”

He said he knew Falun Dafa practitioners for a long time and admired their self-cultivation for the balance of body, mind, and spirit. In our lives today, this balance is very important. And through meditation, through self-improvement, through the work of the practitioners, he said they achieved this balance. He was grateful to practitioners for spreading Dafa in the community.

“So I’m excited to be with you on this journey of self-improvement; a journey to have peace of mind; balance of mind, body, and soul,” he said. He praised Falun Dafa as one of the most important resources known. He said it was appropriate and important to invest time and energy in a conscious effort to improve mental and physical health. He thanked the practitioners for everything they did.

City Councilor: Practicing Falun Dafa Is One of the Best Ways of Life

Cr Sreeni Pillamarri, Councilor of Hornsby Shire, New South Wales, addressed the rally and said, “I am delighted to be with you all, because I believe that practicing Falun Dafa is one of the best ways of life, because I have been in contact with you for a long time. I know it is a way of life, you have freedom of speech, freedom of life, and freedom of belief. It is important for any person in the world to live happily and do what they want to do in the way they believe in.”

He said he saw the practitioners doing meditation and truth-clarification in Parramatta and other places. He encouraged them to continue their efforts in raising awareness of the persecution.

He said the practitioners had widespread support from the public in various ways. Some people may come out and support them. Some people support them from behind. But the practitioners have always been peaceful and quietly did their work. And it showed that they had a good relationship with the community. He encouraged them to keep doing that. He said the Falun Gong group was growing over the past eight years.

He pointed out that the persecution should be stopped because in this world, no one has the right to kill other people and no one can rule other people. He said the way the practitioners protest and push helps people be aware and helps stop the persecution.

Andrew Wilson, former Mayor of Parramatta, said, “I believe in free speech. I support anyone who is in favor of freedom and I support people having peaceful protests. I am seriously dissatisfied with the Chinese government’s efforts to stop a group of peaceful protesters in my country. They (Falun Gong practitioners) are so nice. Yes, they are peaceful, they never cause any trouble.”

He said that Falun Dafa practitioners were very kind and peaceful and that Truthfulness-Compassion-Forbearance is very good and the foundation.

“So what I want to say to you today is, thank you for coming,” he said. “Thank you for the great Tian Guo Marching Band. Thank you for making this city brighter.” 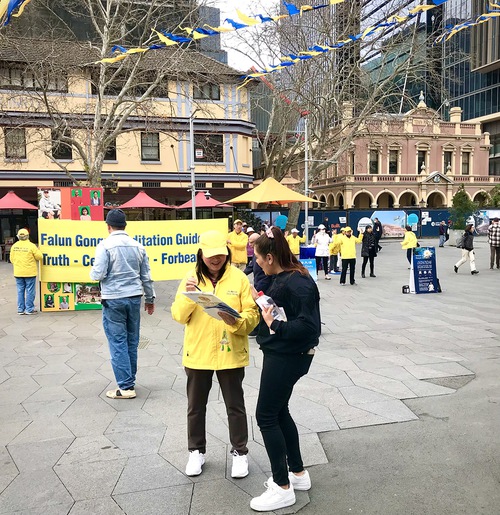 Jiang Zemin, former head of the CCP, perceived the spiritual discipline’s growing popularity as a threat to the CCP’s atheistic ideology, and on July 20, 1999, he issued an order to eradicate the practice.