The names and pseudonyms of each person who has withdrawn are posted on the website of the Global Service Center to Quit the CCP, along with which CCP organisations they have quit. Several VIPs attended and spoke at the rally in Perth.

The rally, the waist drum performance, and the dragon dance drew many people in to watch. People who spoke with practitioners agreed that the communist regime is very dangerous. Many expressed their support for the 400 million Chinese people who have quit the Party organisations. 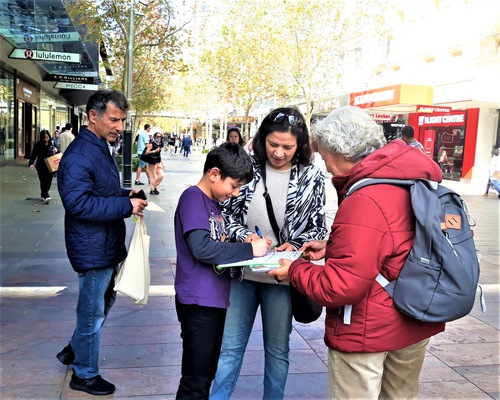 Professor of Law: Do My Best to Support You

Augusto Zimmermann is a professor and the head of law at the Sheridan Institute of Higher Education in Perth. He is also an adjunct professor of law at the University of Notre Dame in Sydney and president of the Western Australia Legal Theory Society.

Speaking at the rally, Professor Zimmermann said that it was laughable when the CCP complained about foreign powers, because communism is a foreign power in China. The ideology was created by Karl Marx, a German, and was exported to China. And this ideology has led to human catastrophes and mass deaths.

He pointed out that it was time for the Chinese to revive their culture and restore the freedoms they deserve. He said he would do everything he could to support practitioners because he has advocated for human rights all his life.

“The best thing the Chinese can do is to be Chinese again and restore their roots and traditions,” Professor Zimmermann said.

The CCP Does Not Represent the Chinese People

Richard Lue, the founder of the Perth Anti-CCP Association, said that it was a great success that 400 million people have quit the CCP organisations.

“Under the CCP regime, freedom does not exist. We cannot believe anything the CCP says. What we have to do is quit the CCP and let the world know that the CCP does not represent the Chinese people.”

Public Support of the Withdrawals

Karma from Bhutan and Ben, an Aussie, stopped to watch the rally for a long time. They signed the petition calling for an end to the CCP’s persecution. Karma said, “From this event, I realise that the Chinese and the CCP are not the same thing. That opened my eyes. The Chinese people, like us, pursue freedom and happiness, and the Chinese government is controlling people.

“I think it’s good that 400 million people have quit the CCP and its affiliated organisations,” she said. “It’s good that people know what’s going on—it’s their right to know.”

Ed Carpio from the Philippines said, “This event is important because it’s good to express your voice. I definitely support it because I’ve been watching a lot of news, and a lot of things are happening in the world. The Communist Party is bad, it is tyrannical. The Communist Party regime is very dangerous. I don’t like it. I definitely support 400 million Chinese people quitting the Party.”

John Lok, a surveyor from the United Kingdom, said, “I think quitting the CCP is totally fine. Why not? Everyone needs to know about it and support it.”

Background: What Is Falun Dafa and Why is the CCP Persecuting it?