In order to tell people about the ongoing persecution in China, they collected signatures on a petition to call for an end to the atrocities and commemorated those who died in China as a result of the suppression.

One passerby said, “Freedom of belief is a God-given right. Everyone should have this right. We should work together to resist the Chinese Communist Party’s (CCP) brutal acts and end the regime’s persecution of Falun Dafa!” 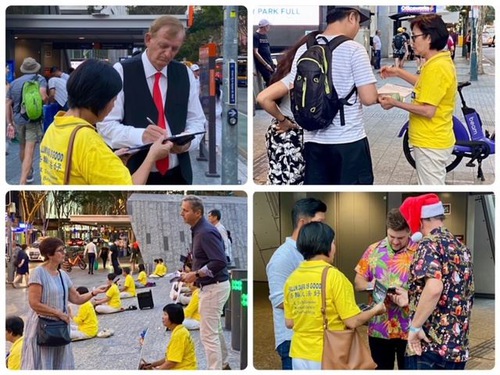 Countries Around the World Must Keep Exerting Pressure on the CCP

The public has become increasingly aware of the CCP’s true nature. Don, who works in a government department, stopped to watch the practitioners’ activities. He said, “Many religious groups, including Falun Dafa, have been suppressed by the evil CCP. Because the principles taught by Falun Dafa – Truthfulness, Compassion, Forbearance, are opposite to the CCP’s ideology, Falun Dafa practitioners are being incarcerated. Their rights are brutally trampled on by the regime. When I see photos of practitioners who died as a result of the suppression, I feel very sad. The CCP is too cruel. It is an evil organisation.”

He emphasised, “Countries around the world must keep exerting pressure on the CCP, and support and help Falun Dafa practitioners.”

Chris is the owner of a private company. When he learned about the persecution in China, he said, “Freedom of belief is a God-given right and everyone should have this right. No one should be controlled by the government or this evil Party. We should work hand in hand to oppose the CCP’s brutalities!”

He added, “I understand that the CCP uses money to bribe politicians in various countries… it will first give them some benefits—but there is a big trap waiting for them afterwards. The CCP is very evil.

“This COVID-19 virus started in Wuhan. Now the media no longer reports the truth. Any reports telling the truth are censored by the Internet. We cannot see the truth now including on social media.”

I Will Keep Supporting You

Charlie, who works in IT, noticed practitioners’ activities. He spoke to a practitioner and signed the petition to call for an end to the persecution in China. Charlie said, “I know very well the persecution suffered by Falun Dafa. I will keep supporting you.”

He continued, “I am aware that the CCP is an evil organisation. The regime suppresses Falun Dafa, Hong Kong nationals, Tibetans, Ugyhurs and others.”

Charlie told a practitioner, “I am moved by your unwavering spirit in telling people what is happening in China. Please take care and I will keep supporting you.” 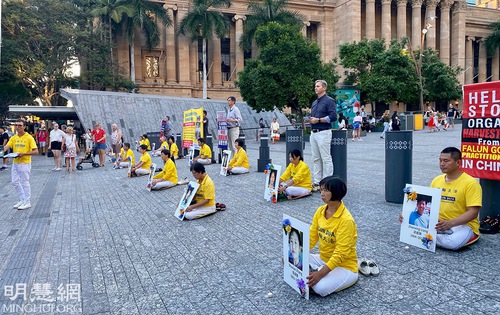 Background: What Is Falun Dafa and Why Does the CCP Persecute Dafa?

Brisbane: Car Parade Calls for End of the CCP