(Minghui.org) Today’s news from China includes incidents of persecution that took place in 14 cities or counties in 8 provinces, where at least 22 practitioners were recently persecuted for their belief. 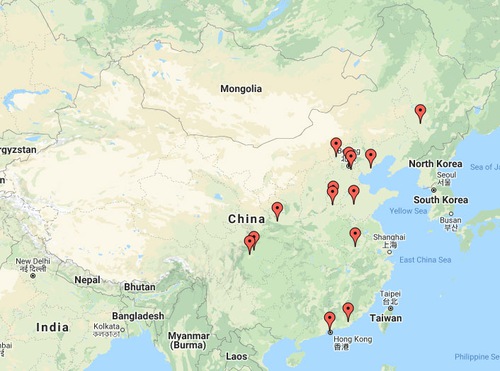 Mr. Liu Hongshu was sentenced to three years in prison by the Qishan County Court and is now detained in Weinan Prison.

Ms. Xu Mingxia was sentenced to four years in prison by the Qishan County Court and is now detained in Shaanxi Province Women’s Prison.

Both practitioners were detained in the Anyang City Detention Centre. It was recently learned that Ms. Fan Xiangqin and Ms. Fang Caiyun were sentenced to one year in prison and one and a half years in prison respectively.

Ms. Song Neiqin, 82, was reported to police for talking about Falun Gong to some young people in a barbershop. Her home was ransacked. The case against her was submitted to the Changli County Court. She will be tried in court on December 8, 2021.

Mr. Qiao Fa lives in Huojiafang Village, Xuanpingbao Township, Wanquan District. Village official Fan Jin led some town officials to Mr. Qiao’s home around 8 p.m. on October 12, 2021. They ransacked his home and confiscated three photos of Falun Gong’s founder and one Falun Gong book. They also removed a poster from the wall and two desk calendars, and took them.

Ms. Mu Zhitai was tried in the Peicheng District Court on the morning of November 26, 2021. Her lawyer from Beijing defended her innocence in the court. Ms. Mu’s family members and relatives were not allowed in the courtroom.

Ms. Xue Aimei will be tried in the Nanshan District Court on the afternoon of December 3, 2021.

Ms. Pei Ling was harassed at home on October 25, 2021. The director Zhang and the secretary of the Party committee from the Hongqi Village Neighborhood Committee, Shengli Sub-district, went to Ms. Pei’s home and pressured her to sign the four statements (to stop practicing Falun Gong). They threatened to send Ms. Pei to a brainwashing centre. A few months ago, her home was ransacked and her Falun Gong books and computer were confiscated.

Ms. Wang was sentenced to one year and eight months in prison last year and served the term in the detention centre. She was taken the Guangdong Province Brainwashing Center three months before she was released. She has now returned home.

Ms. Yu Zhanqin was arrested in September 2021 and is still being detained.

Several officers from the Nancheng Police Station including the director Sun Yi, went to Mr. Song Jianguo’s home on October 14, 2021. After Mr. Song refused to open the door, a locksmith was called in. Mr. Song was arrested and taken to the police station. His home was ransacked. His personal belongings were confiscated including his Falun Gong books, a photo of Falun Gong’s founder, two cell phones, an iPad, etc. Mr. Song was interrogated and released 24 hours later.

Four officers went to Ms. Song’s home again on November 14, 2021. Mr. Song was taken to Nancheng Police Station and was interrogated for a long time.

Ms. Sun Liting lives in Gongzhuangzi Village, Huangzhuang Town. She was harassed at home by some town government officials in late October 2021. They pressured her to state that she gave up practicing Falun Gong in front of a camera. She refused.

Ms. Sun was taken from her home, against her will, to the Huangzhuang Town Government office in late November 2021. Mi Wenzhong, secretary of the Gongzhuangzi Village Party Committee, and some people from the town government pressured her to give up practicing Falun Gong. Ms. Sun was released later that day.

Ms. Wu Xiuying was arrested on November 6, 2021. Her current whereabouts are unknown.

Ms. Zheng Weirong lives in Fengxia Village, Mengyang Town. A group of people went to her home around 10 p.m. on November 25, 2021. They pressured her to sign a guarantee statement, which she refused. They forcefully held her hand to sign it.

Mr. Zhang Yixiang was harassed at home on November 24, 2021. Several people from the local government and the local judicial office told him to go to the judicial office. The next day, Chen from the Baiguo Village went to Mr. Zhang’s home by car and took Mr. Zhang, his wife and his granddaughter to the village office. Under pressure Mr. Zhang’s wife signed a guarantee statement on his behalf.

Ms. Sun Jinhui, 47, lives in Ningjiajiezhuang Village, Shanggao Sub-district, Taishan District. Because she distributed Falun Gong materials, she was sentenced to two years and two months in prison and fined 10,000 yuan by the Feicheng City Court on September 22, 2021. Her personal property including four printers, a camera and a computer were confiscated.

Ms. Sun appealed to the Taian City Intermediate Court on September 26, 2021. She received the verdict on October 25, 2021. The original term was upheld in the intermediate court.

Wang Xiansheng, deputy of Security Division, Gaoxin District Police Department, attempted to take Ms. Sun into custody. Ms. Sun has undergone physical examinations many times, but was denied admission by the detention centre due to her health condition. Ms. Sun is currently under residential surveillance.